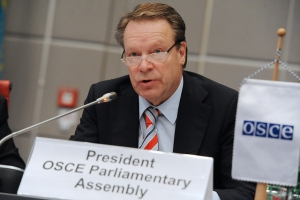 Currently serving as President Emeritus, Ilkka Kanerva (MP, Finland) was elected President of the Assembly at the 2014 Annual Session in Baku and re-elected in Helsinki in 2015.

He is the first person to have served as both OSCE PA President and OSCE Chairperson-in-Office in the Organization's history, having held the latter post in 2008.

Kanerva was Head of the Finnish Delegation to the OSCE PA from 2003 to 2007 and 2008 to 2015. Elected Vice-President of the Assembly in 2013 to fill a vacancy, he has also served as a member of the OSCE PA’s Subcommittee on the Rules of Procedure and as Co-Chair of the OSCE PA’s Helsinki +40 Project.