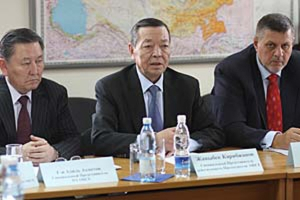 During his visit, Mr. Akhmetov worked closely with representatives of other international organizations present in Bishkek, including the UN Secretary General’s Special Envoy Jan Kubis, the EU Special Representative for Central Asia Pierre Morel, the Special Envoy of the OSCE Chairperson-in-Office Zhanybek Karibzhanov, and the representative of the CSTO Valeriy Semerikov, as well as the Head of the OSCE Centre in Bishkek, Ambassador Andrew Tesoriere.

After holding meetings with the former Foreign Minister Roza Otunbaeva, interlocutors of the interim government, members of parliament and representatives of civil society, Mr. Akhmetov reported to President Soares that the situation in Kyrgyzstan was improving but remained very dangerous and that the international community faced a great challenge in helping to restore order and stability in the country.

President Soares has urged restraint by all parties in Kyrgyzstan and stressed that “a peaceful resolution and broad-based political dialogue is the only way forward for Kyrgyzstan.” He also stated that the PA stands ready to support OSCE efforts aimed at facilitating dialogue.

Mr. Akhmetov will report on his visit to the OSCE PA’s Bureau, which meets in Copenhagen on 19 April. The crisis in Kyrgyzstan will also be discussed in a special session of the Trans-Asian Parliamentary Forum, on 15 May in Almaty.

Mr. Akhmetov has been a member of the Kazakh Senate since August 2007. He is Secretary of the Senate Committee for International Relations, Defense and Security.