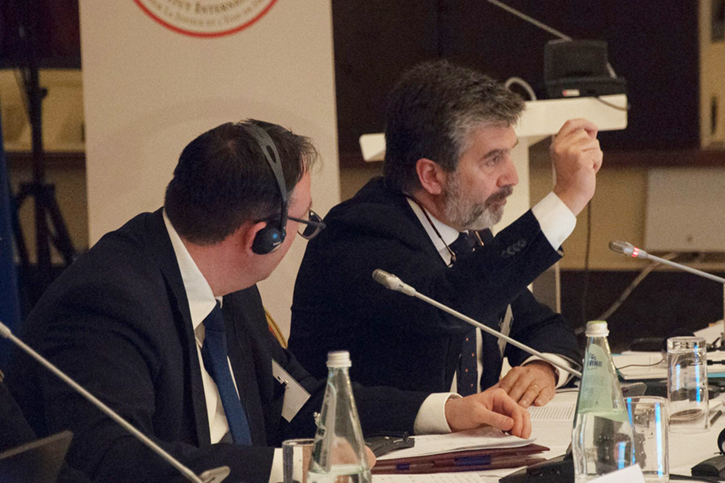 Ignacio Cosido speaks at the Malta event, 22 March 2018.COPENHAGEN, 28 March 2018 – Spanish Senator Ignacio Cosido, Member of the OSCE PA Ad Hoc Committee on Countering Terrorism, participated in the Regional Workshop on “The Nexus of Parliamentarians and Criminal Justice Actors in Counter Terrorism,” held in Malta on 22 March by the International Institute for Justice and Rule of Law.

During his keynote intervention in the session devoted to “Parliamentary oversight of intelligence in the context of a rule of law-compliant counter terrorism policies,” he emphasized the importance of parliaments promoting the respect for the rule of law and providing political guidance to the intelligence community. In particular, he called for a greater role of parliaments in building social trust and confidence towards counter-terrorism efforts of state authorities, for instance, by enhancing transparency.

Senator Cosido also underscored the need of promoting new legislative and regulatory frameworks pertaining to the protection of citizens' rights as well as the respect for privacy. He noted that the main challenge that lays ahead is developing innovative security measures which do not restrict fundamental freedoms.

Marco Bonabello, PA Liaison Officer and Advisor as well as the CCT Focal Point in the Secretariat, moderated the session of the workshop devoted to “Ensuring CT policy inclusiveness and filling the gap between the executive branch and community-level stakeholders.”