VIENNA, 1 November 2018 – Makis Voridis, Chair of the OSCE Parliamentary Assembly’s Ad Hoc Committee on Countering Terrorism, is in Vienna this week participating in the second OSCE-wide Seminar on Passenger Data Exchange. The conference, organized by the OSCE Transnational Threats Department, is exploring OSCE responses to the challenges related to returning and relocating foreign terrorist fighters. 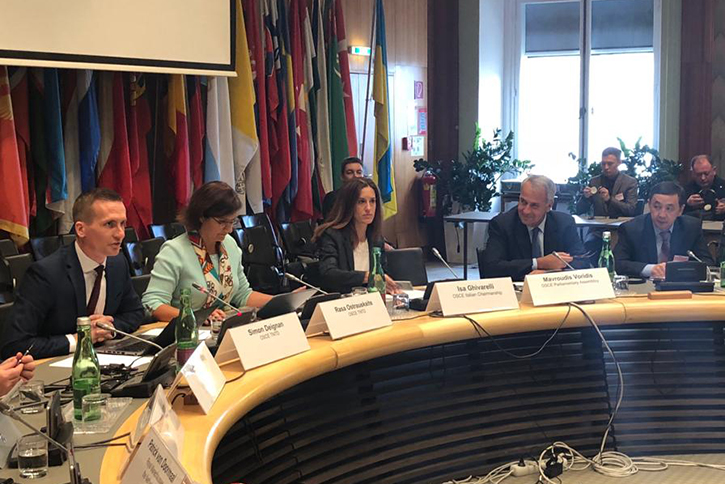 Makis Voridis (second from right) at the conference in Vienna on strengthening responses to returning foreign terrorist fighters, 1 Nov. 2018Voridis spoke today at the conference’s introductory session, focusing his remarks on the resolution on preventing terrorism that was adopted by the OSCE PA at last summer’s Annual Session in Berlin. He discussed possible ways in which the OSCE PA and parliamentarians can promote compliance with UN Security Council Resolution 2396, which urges countries to strengthen their efforts to stem the threat posed by foreign terrorist fighters returning from conflict zones through adopting measures on border control, criminal justice, information sharing and counter extremism.

Voridis, a member of parliament from Greece, discussed the work of the Ad Hoc Committee on Countering Terrorism (CCT), noting that the 12-member body is tasked to assess emerging trends and promote co-ordination with the OSCE governmental structures and other key partners, such as the UN and its agencies. The CCT contributes to the implementation of relevant commitments through policy guidance and other targeted initiatives, he said.

He also met today with Luca Fratini, Deputy Head of Mission at the Permanent Representation of Italy at the OSCE, for discussions focused on OSCE PA input on counter-terrorism at the upcoming Milan Ministerial Council.

Voridis will be back in Vienna on 11-12 November for meetings with counterparts from the OSCE’s executive structures and discussion of the Berlin Declaration’s counter-terrorism resolution at the OSCE Security Committee.