COPENHAGEN, 21 September 2018 – Several leaders of the OSCE Parliamentary Assembly have actively participated over the past two weeks in the Human Dimension Implementation Meeting, organized by the OSCE Office for Democratic Institutions and Human Rights and the Italian OSCE Chairmanship, speaking at working sessions on democracy, fundamental freedoms, rights of migrants, human trafficking, and freedom of the media. 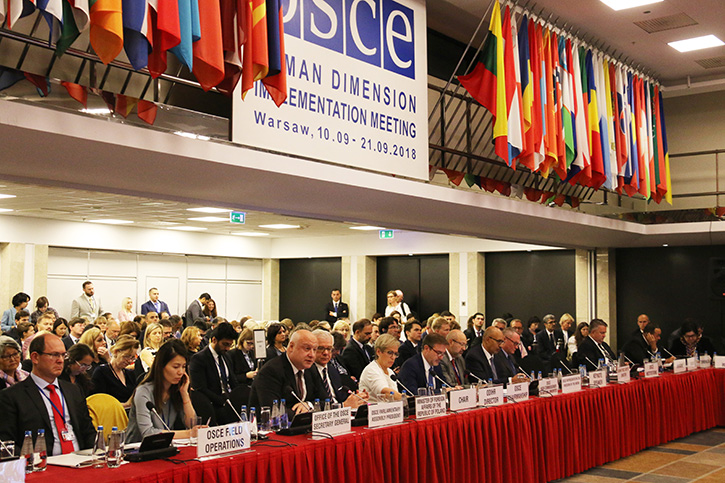 President Tsereteli delivers opening remarks at the HDIM in Warsaw, 10 Sept. 2018.In an address at the opening of the HDIM in Warsaw on 10 September, OSCE PA President George Tsereteli (Georgia) stressed that open dialogue on controversial issues must continue and opposing views must be heard by all in order to successfully work together towards implementing OSCE commitments.

“Our primary goal is to better the lives of the more than one billion people of the OSCE area,” he said. “Our duty is to respond to their desire to live in a free society, where democratic debate is encouraged and not stifled, where journalists are respected and not jailed or killed, where a simple citizen can trust that his or her voice counts and is not discarded.”

President Tsereteli was joined at the HDIM by OSCE PA human rights committee Rapporteur Kyriakos Hadjiyianni (Cyprus), who spoke at the working session on democratic institutions and elections, and again the following day during discussions on freedom of the media.

In his remarks, Hadjiyianni stressed that the OSCE and civil society must work together to defend journalists from persecution, promote quality journalism and guarantee that efforts to address “fake news” comply with international standards for free media. Ensuring an informed electorate in a democratic society requires that governments refrain from all forms of censorship or intimidation, but also requires higher standards in journalism, he said.

The OSCE PA was also represented by Vice-Presidents Isabel Santos (Portugal) and Kari Henriksen (Norway), and human rights committee Chair Margareta Kiener Nellen (Switzerland), who spoke at several working sessions of the meeting. Kiener Nellen noted that parliamentarians have an important role to play in promoting tolerance and non-discrimination.

“Through the enacting of relevant legislation aimed at combating hate crimes and hate speech, and promoting equal rights and opportunities, parliaments have a strong tool at their disposal to improve the situation qualitatively,” she said.

Santos spoke on the rights of migrants, noting that the main question is whether we will be able to meet together the challenges of increased migration flows and continue to honor the commitments made globally.

“Migratory movements constitute a constant mark in the history of mankind and it will never be possible to stop those who are driven by the despair generated by persecution or by war nor those nourished by the hope of a new opportunity of life with safety and dignity,” Santos said.

In working sessions on fundamental freedoms, rights of migrants, and human trafficking, Henriksen focused on promoting opportunities and protections for women and children. She noted that promoting the integration of migrant women by facilitating their access to the labour market contributes to general prosperity.

“In my country, Norway, the participation of women in the work place has contributed more to our prosperity and GDP surplus than oil revenues,” Henriksen said. “We offer introduction programmes for migrant women to give them the necessary language skills as this is a basic precondition for entry in the labour market.”

Europe’s largest annual human rights and democracy conference, the HDIM is organized every year by the OSCE/ODIHR. It serves as a platform for the OSCE, other international organizations and civil society to assess the implementation of OSCE human dimension commitments, share best practices and make recommendations for further improvement.

It took place in Warsaw at the Sofitel Hotel on 10-21 September.