KYIV, 21 December 2018 – A sustained ceasefire and increased demining activities in eastern Ukraine are urgently needed for the sake of the safety of civilians, especially children, said two leaders of the OSCE Parliamentary Assembly’s human rights committee today. Such measures will enhance prospects for a political solution to the conflict, they noted, and urged humanitarian gestures of goodwill to take place for the holiday season such as prisoner exchanges. 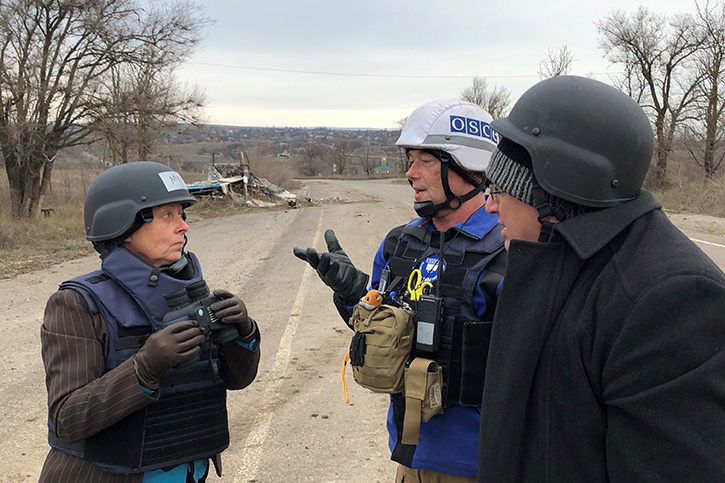 Margareta Kiener Nellen and Kyriakos Hadjiyianni on patrol with the OSCE Special Monitoring Mission in the village of Berdianske east of Mariupol, 19 Dec. 2018Wrapping up a week-long visit to Ukraine that included meetings in the capital and extensive field visits in the east of the country, Margareta Kiener Nellen (MP, Switzerland) and Kyriakos Hadjiyianni (MP, Cyprus), Chair and Rapporteur, respectively, of the Committee on Democracy, Human Rights and Humanitarian Questions, highlighted the plight of civilians impacted by the conflict, including internally displaced persons (IDPs). They urged that more attention be paid to the needs of IDPs and to create the conditions for their return.

“Innocent people continue to suffer due to the irresponsible actions of those who recklessly endanger civilians, whether by laying mines or intense shelling,” said Kiener Nellen. “I urge an immediate cessation of hostilities and a renewed commitment to fully adhere to international humanitarian law to respect people impacted by this conflict. The large quantity of mines and the enormous number of victims are already a humanitarian catastrophe for the region.”

After more than four years of conflict, Kiener Nellen and Hadjiyianni underlined, Ukraine ranks among the most mine-affected countries in the world, with nearly 2,000 landmine casualties in eastern Ukraine since 2014. In addition to violating international humanitarian law, the use of mines endangers the lives of civilians in the conflict areas and hinders economic recovery and future development of these areas, they emphasized.

On patrol with the OSCE Special Monitoring Mission (SMM) in areas near Mariupol, Kiener Nellen and Hadjiyianni visited villages affected by the conflict, witnessing the hazardous environment due to landmines and the dramatic impact on populations near the contact line. They spoke with doctors and met patients at the hospital in Dnipro where 90 per cent of conflict-related wounds are mine explosion traumas and 10 per cent bullet wounds. They observed the civilian transit through the contact line at Pyshchevyk checkpoint and damages to transport infrastructures in the buffer zone.

“Seeing up close the human drama caused by this conflict is a reminder of the failure of political leaders to reach a sustained settlement let alone to fully implement their commitments under the Minsk Agreements,” said Hadjiyianni. “While we are longing for a comprehensive solution, we expect full compliance by all sides with international humanitarian law. Humanitarian measures must be pursued to improve the lives of the people affected by this conflict.”

He added that one such step would be a major exchange of prisoners to take place for the holiday season. He and Kiener Nellen visited a penitentiary near Mariupol on Wednesday where they met with detainees who were transferred from Donetsk last week.

They met Monday in Kyiv with Iryna Gerashchenko, the Ukrainian President’s Humanitarian Envoy at the Minsk peace talks, Artur Gerasymov, Head of the Ukrainian Delegation to the OSCE PA, and Ambassador Ertugrul Apakan, Chief Monitor of the SMM in Ukraine. At the SMM Mariupol Hub office, they were briefed Wednesday on a range of issues including land- and sea mines. 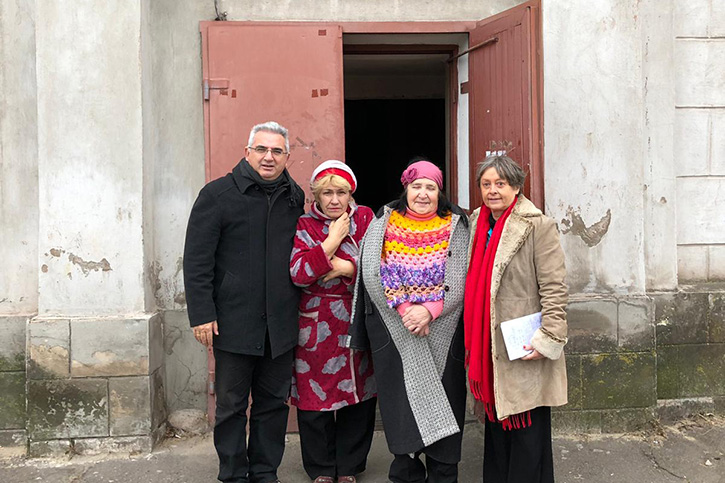 Margareta Kiener Nellen and Kyriakos Hadjiyianni on patrol with the OSCE Special Monitoring Mission in the village of Berdianske east of Mariupol, 19 Dec. 2018 They also met with Miljenko Vahtaric, Technical Adviser on Humanitarian Mine Action at the OSCE Project Coordinator in Ukraine, Serhii Zlakoman, State Secretary at the Ministry for Temporarily Occupied Territories and Internally Displaced Persons of Ukraine, Lyudmyla Denisova, Ombudsperson of Ukraine, and visited the Halo Trust demining site in Talakivka.

Kiener Nellen and Hadjiyianni will present their findings at the Winter Meeting in Vienna, 21-22 February 2019.

This week’s mission in Ukraine is the fifth time PA officials have visited the country in 2018. President George Tsereteli led two delegations to the country, in January and May, and Special Representative on Gender Issues Hedy Fry visited in July. In November, the PA participated in a pre-electoral visit. The PA plans to deploy election observation missions to presidential and parliamentary elections scheduled in 2019.

In the OSCE PA’s Berlin Declaration adopted last summer, the Assembly reiterated its support for a settlement of the Ukraine conflict based on implementing the Minsk Agreements in their entirety and de-occupation of the Autonomous Republic of Crimea and the city of Sevastopol, including the full withdrawal of Russian military forces from Ukrainian territory.

For photos of this week’s visit to Ukraine, please click here.