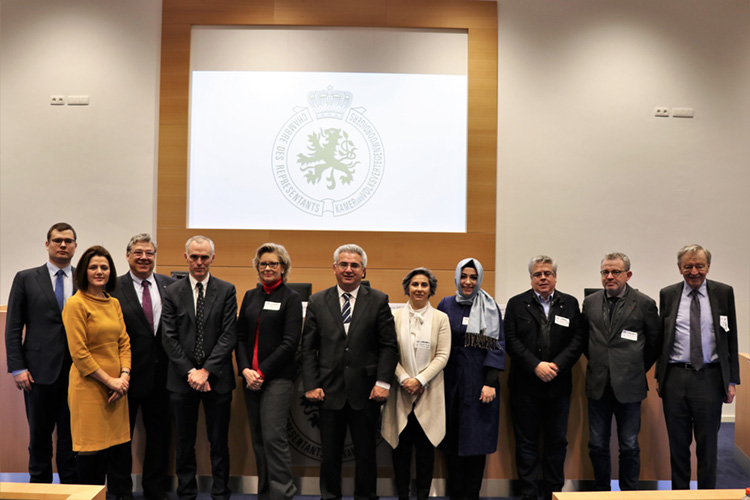 Members of the Ad Hoc Committee on Migration at the Belgian House of Representatives in Brussels, together with Simon Mordue, Deputy Director-General for Migration and Home Affairs of the European Commission, 6 Feb. 2018BRUSSELS, 6 February 2018 – Senior members of the OSCE Parliamentary Assembly were in Brussels on 5-6 February to learn more about Belgian migration and asylum policies as well as measures to promote the integration of refugees. The visit was part of a series of activities of the OSCE PA Ad Hoc Committee on Migration which seek to move beyond the assessing of emergency measures in frontline countries to medium- to long-term policies to promote the integration of refugees in destination countries.

Extensive discussions addressed the different reception options available to unaccompanied foreign minors in particular, from dedicated units within federal reception centres to small care facilities managed by NGOs, foster care and independent living. Committee members noted that, as the estimated numbers of unaccompanied children arriving in Belgium had dropped significantly to about 2,000 each year compared to a peak of over 5,000 in 2015 at the height of the migration crisis, it was now possible to implement this needs-based approach which seeks to provide adapted care suited to the needs of the individual.

Members said however that a number of challenges remain with regard to procedures for determining the best interests of the child and for correctly assessing age due to the lack of a common European approach in these areas. One main obstacle to family reunification remains the high cost of the DNA tests, they observed.

“Children continue to slip through the cracks of Europe’s safety nets,” said the Chair of the Ad Hoc Committee, Swiss parliamentarian Filippo Lombardi. “These children remain at greatest risk of falling victim to labour and sexual exploitation. We must do whatever we can to prevent further disappearances, and to provide those who have been granted protection with the best possible conditions to rebuild their lives in Belgium.”

Committee members were also briefed about integration initiatives, including social orientation courses providing basic guidance on daily life in Belgium and which are provided in the language of the refugees as well as language courses and individual career orientation.

Belgian parliamentarian and Committee member Nahima Lanjri, who organized the field visit, emphasized the benefits to be gained by all parties from investing in integration so that refugees can contribute to society.

“Although improving conditions for refugees has been criticized in a number of European capitals as creating an incentive for more to come, we must realize that successful integration of those who are entitled to stay is in the best interest of all parties concerned. In the case of children, the process of integration starts from day one by sending them to regular school as soon as they arrive in a reception centre. There is of course always room for improvement, for example in the area of employment,” Lanjri said.

The programme on 5-6 February included briefings with officials from the Federal Agency for the Reception of Asylum Seekers (Fedasil), the Brussels Integration Agency, as well as representatives from the Office of the Commissioner General for Refugees and Stateless Persons and the Immigration Office working with unaccompanied minors. The Committee also visited a reception centre specializing in unaccompanied minors who were either expecting or were already mothers, as well as the NGO Minor-Ndako providing shelter and care to these children.

The visit to Brussels also provided the opportunity to meet with officials from the European Commission, European External Action Service, International Organization for Migration and Office of the UN High Commissioner for Refugees to follow up on the Committee’s recommendations and assess progress in implementing the European Agenda on Migration. The discussions on Tuesday focused in particular on the international community’s efforts to deal with the humanitarian crisis in Libya and to facilitate legal and safe alternatives to the Central Mediterranean route.

Last October, the Committee issued a report and a set of recommendations on Ensuring a Coherent, Shared and Responsible Governance of Migration and Refugee Flows based on a year and a half of extensive field visits and meetings with key international actors, including with officials from EU institutions, IOM, UNHCR and ICRC in Brussels and Geneva January 2017. More information about the OSCE Parliamentary Assembly’s migration-related work can be found here.