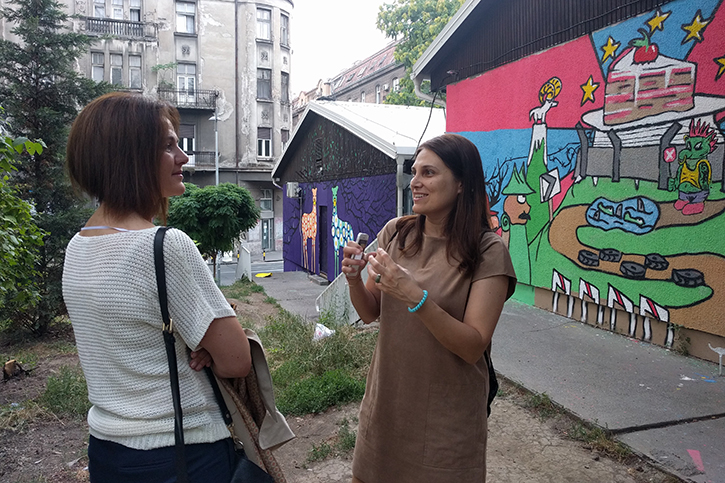 Ad Hoc Committee on Migration Chair Nahima Lanjri visiting Refugee Aid Miksalište in Belgrade, 10 June 2018BELGRADE, 12 June 2018 – Improvements in the accommodation of migrants and refugees in Serbia have been welcomed by a delegation led by the OSCE Parliamentary Assembly’s Nahima Lanjri (MP, Belgium), with parliamentarians noting that other OSCE countries can learn from these positive developments. They pointed out however that Serbia’s capacity needs to be expanded and adapted to fully meet the needs of unaccompanied minors.

Lanjri and several other members of the OSCE PA Ad Hoc Committee on Migration completed their visit today, having met with representatives from the Serbian government, the international community, civil society and migrants and refugees to assess current developments in the field of migration, with a special focus on unaccompanied and separated children. The delegation included Ad Hoc Committee Vice-Chair Pascal Allizard (MP, France), and members Kyriakos Hadjiyianni (MP, Cyprus), Stefana Miladinovic (MP, Serbia) and George Varemenos (MP, Greece).

During the three-day visit, the main topics of discussion included developments in improving the legislative framework as well as ongoing challenges in implementation.

“Serbia’s efforts in supporting migrants – and particularly refugee and migrant children – have not gone unnoticed. It is commendable that almost 90 per cent of migrant children attend primary school in Serbia regardless of their legal status. Serbia’s new Law on Asylum and Temporary Protection is also a significant step toward full compliance with international law, with a number of important provisions regarding unaccompanied minors, such as those concerning the guardianship system as well as taking into consideration the best interests of the child,” Lanjri said.

She added however that there is a need for a more objective and systematic approach to age determination in order to ensure that minors are accommodated appropriately and protected from possible mistreatment.

Delegation members noted that unaccompanied minors are a particularly vulnerable category who are at risk of exploitation and sexual abuse by smugglers and that this threat requires further attention.

Stefana Miladinovic and other Ad Hoc Committee on Migration members meet with international organizations and NGOs in Belgrade, 12 June 2018Miladinovic, who also serves as Head of Serbia’s Delegation to the OSCE PA, noted that as a country with a high number of migrants in transit, Serbia has focused on establishing reception facilities for short stays and that there is now a need to provide adequate reception capacity also for longer term stays. The first steps have already been taken in this direction, she pointed out, and highlighted the positive practice of issuing documents to children born in Serbia.

“Our local communities in Serbia have largely welcomed refugees and migrants, and we have also enjoyed a good level of co-operation between government authorities, international organizations and NGOs,” Miladinovic said. This good co-operation was also emphasized by the representatives of the international organizations and civil society that the delegation met with.

On Monday, the Migration Committee members met with a broad range of officials dealing with migration and asylum policies, including Vladimir Cucic, Commissioner for Refugees and Migration as well as representatives from the Ministry of Labour, Employment, Veteran and Social Affairs, the Asylum Office of the Ministry of Interior, and the Ministry of Education.

A number of site visits to facilities sheltering unaccompanied minors in Belgrade also took place, including Krnjaca Asylum Centre, two specialized facilities for unaccompanied minors, one managed by the Jesuit Refugee Service, the other a new state facility opened in May, as well as the 24/7 aid hub Refugee Aid Miksaliste. 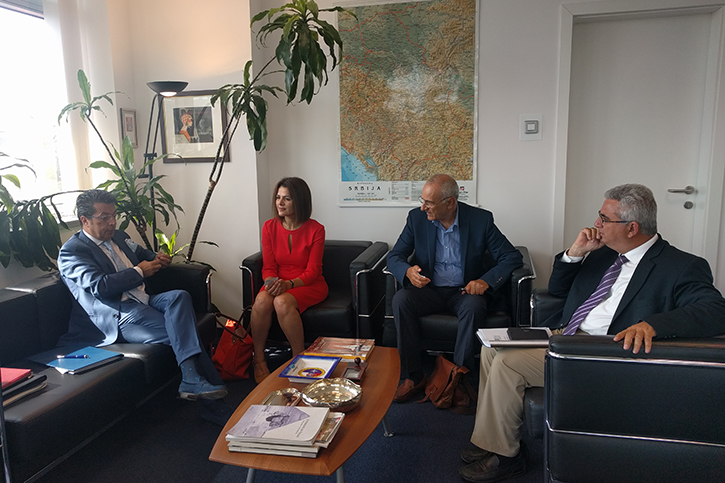 Ad Hoc Committee members meeting with Ambassador Andrea Orizio, Head of the OSCE Mission in Serbia, 12 June 2018Today the delegation was received by the Head of the OSCE Mission to Serbia, Ambassador Andrea Orizio, who, together with his colleagues, gave a comprehensive overview of the migration-related activities of the field operation in Serbia. These included initiatives such as supporting the enrollment of migrant children in local schools through seminars on inter-cultural communication for teachers and English learning, as well as projects to boost regional co-operation in combating smuggling and trafficking of migrants.

Delegation members also had the opportunity to learn more about the initiatives of international organizations and non-governmental organizations working with migrant children, to debate their concerns and identify areas for improvement. At a roundtable discussion today with representatives of international organizations and NGOs, the parliamentarians learned more about their initiatives and heard about examples of positive practices with respect to refugee and migrant children. One such practice is the use of cultural mediators, who help facilitate communication between migrants and authorities.

The next meeting of the Ad Hoc Committee on Migration will take place in Berlin, Germany on 7 July 2018 at the margins of the OSCE PA Annual Session. A debate on migrant children will also take place during the Annual Session when the Assembly debates the draft resolution proposed by Chair Lanjri on behalf of the Committee, entitled “Minors on the Move: The Role of the OSCE and the OSCE Parliamentary Assembly in Building an Effective Protection Framework.”

Photos of this week’s visit to Serbia are available for public use on Flickr.

For more on the OSCE PA’s work on migration, please click here.