BELGRADE, 21 September 2018 – Beginning his second visit to the region since his appointment in July, the OSCE PA’s Special Representative on South East Europe, Mark Pritchard (United Kingdom), has met in Belgrade the past two days with a range of governmental and parliamentary leaders, as well as representatives of the international community and civil society. 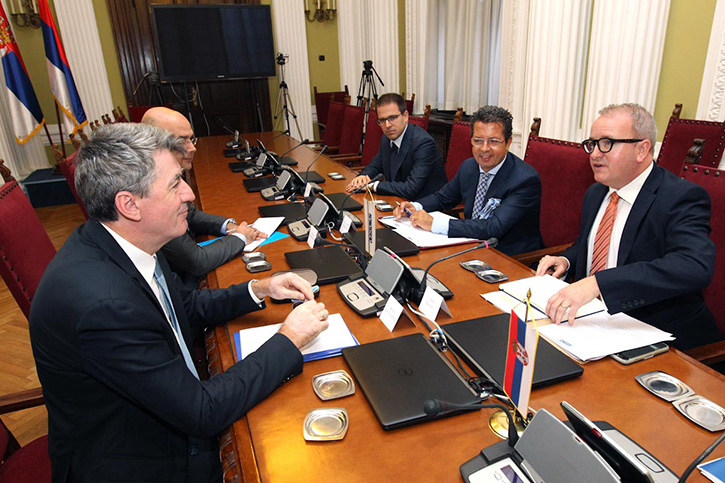 Special Representative Mark Pritchard meets with Žarko Obradović, Chairperson of the Foreign Affairs Committee, in Belgrade on 21 Sept. 2018 (Photo: OSCE/Milan Obradovic)In meetings with Chairperson of the National Assembly’s Foreign Affairs Committee Žarko Obradović, Director of the Office for Kosovo and Metohija Government of the Republic of Serbia Marko Durić and the Serbian Delegation to the OSCE Parliamentary Assembly, key topics of discussions have included regional co-operation, the EU-facilitated Belgrade-Pristina dialogue, parliamentary oversight, and the OSCE’s role in the region.

“I look forward to continuing my substantive discussions with key figures in the region on a range of topics,” said Pritchard today. “Parliamentary diplomacy is a vital component of enhancing regional dialogue on all of the challenges facing Serbia and the region as a whole.”

Pritchard praised Serbia for remaining actively committed to bilateral relations and regional co-operation. He also commended the OSCE Mission to Serbia for the valuable expertise and assistance it continues to offer the country. Special Representative Pritchard will continue his visit to Pristina. Last month, he was in Albania and Montenegro in his first visit to the region since being appointed Special Representative in July.

He welcomed in particular the progress that Serbia has made in its European Union accession bid and urged continued commitment to the process. He also highlighted relevant resolutions adopted by the OSCE Parliamentary Assembly and encouraged follow-up to election-related recommendations made by the OSCE’s Office for Democratic Institutions and Human Rights.