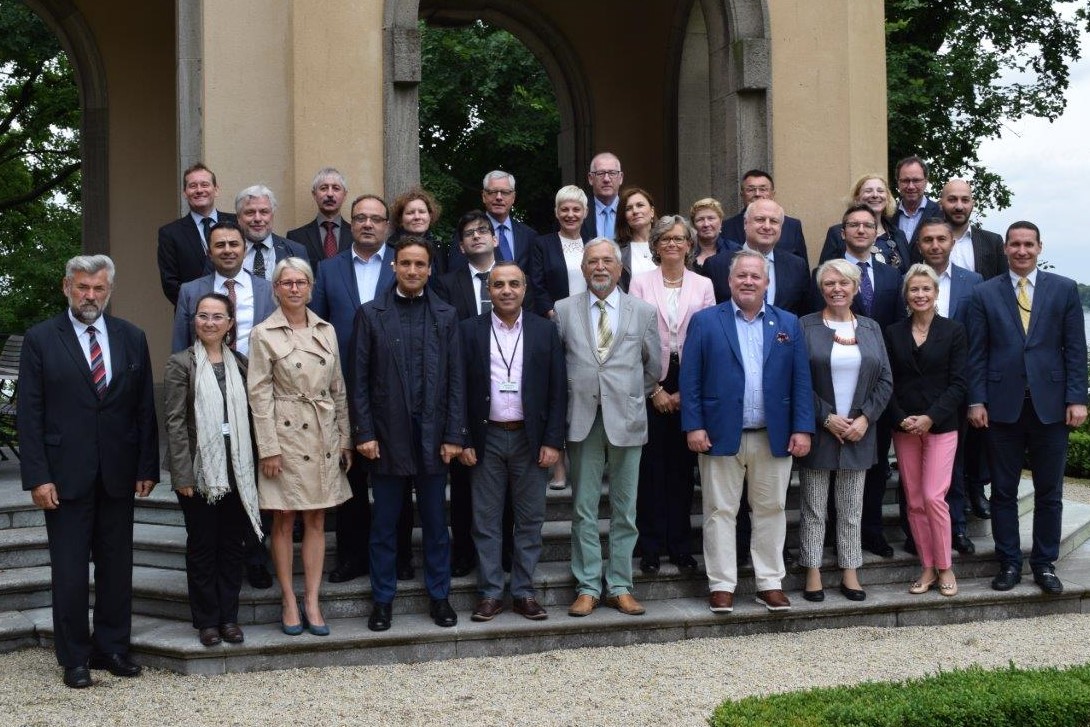 Participants at Leinsweiler IV Seminar, 12 July 2018BERLIN, 13 July 2018 – An OSCE Parliamentary Assembly seminar held this week in Berlin, Germany, focused on how to prevent ethnic conflicts through law and the exchange of best practice, notably through the protection of national minorities and accommodating ethnic diversity. The participants discussed in an informal setting the central role which parliamentarians could play in forming government policy towards national minorities and in promoting legislation that can protect the rights of national minorities.

OSCE PA President George Tsereteli opened the seminar on Wednesday, noting that entrenched positions and nationalist rhetoric as well as unilateral actions which run contrary to the founding principles of the OSCE have threatened to undermine trust in the Organization’s ability to find common ground.

“History has taught us that intolerance and discrimination, a failure to accommodate diversity and the politicization of minority issues are the first steps down a slippery slope towards tremendous human suffering,” Tsereteli said. “In reality, minorities should be seen as an asset for OSCE countries, where they can serve as a bridge in inter-state relations, in particular in border areas”.

Bringing together more than 20 Members of Parliament from 12 countries, the 'Leinsweiler seminar' included the participation of German parliamentarians representing areas where minorities live, the OSCE High Commissioner on National Minorities, the President of the Federal Union of European Nationalities, as well as representatives from the Advisory Committee of the Council of Europe’s Framework Convention for the Protection of National Minorities and a number of minority associations.

Noting that there are few examples of truly homogenous states, President Tsereteli underlined the importance of accommodating ethnic, religious and linguistic diversity, and cautioned participants not to become complacent and underestimate the potential for renewed conflict in the OSCE region. He also recalled the provisions of the OSCE’s 1990 Copenhagen Document which emphasizes that questions relating to national minorities can only be satisfactorily resolved in a democratic political framework based on the rule of law, with a functioning independent judiciary.

President Tsereteli also commended the OSCE High Commissioner on National Minorities, Ambassador Lamberto Zannier, for his effective work in the area of developing guidelines for states, such as the Bolzano/Bozen Recommendations on National Minorities in Inter-State Relations, which were adopted ten years ago.

In her opening remarks, OSCE PA Treasurer and Head of the German Delegation Doris Barnett stressed the need for dialogue on potential ethnic conflicts and national minorities. This includes an exchange of good practices, an analysis of the effects on state structure and on conflicts on the existing security framework.

“Minorities are a sensitive and often an emotional issue,” Barnett said. “Being able to live together in a meaningful way is the only way in which the potential of every human will fully express itself.”

The seminar examined a number of cases of best practice in countries across the OSCE region, including Germany, Switzerland, the Åland islands in Finland, and South East Europe, with participation by OSCE parliamentarians from Armenia, Azerbaijan, Bulgaria, Croatia, Denmark, Finland, Germany, Georgia, Hungary, the former Yugoslav Republic of Macedonia, Romania, and Sweden.

OSCE High Commissioner on National Minorities Lamberto Zannier delivered the keynote speech on early intervention and protection of minority rights, especially in the area of education as a means of preventing ethnic conflicts, highlighting the importance of integration as a means of building resilient societies, and emphasising the key role which parliamentarians can play in influencing legislation.

The seminar, entitled “Addressing potential ethnic conflicts through law and good practices” was the fourth of a series of OSCE PA seminars organized by the Delegation of Germany to the OSCE PA and supported by the German Foreign Ministry. The first three were held in the French-German border region of Leinsweiler, in March 2015, April 2016 and May 2017 and were dedicated to considering parliamentary contributions to OSCE efforts in addressing conflicts.