KYIV, 17 December 2018 – Leaders from the OSCE Parliamentary Assembly’s human rights and humanitarian committee today called for all sides of the conflict in eastern Ukraine to lay down their weapons as a critical step in finding a lasting solution to the crisis in and around Ukraine. 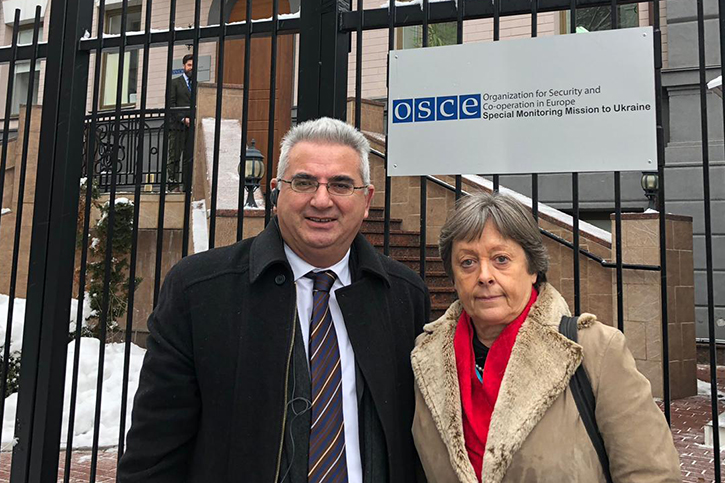 Following the meetings in Kyiv the OSCE parliamentarians will be travelling to several cities in the east of Ukraine.

“The world cannot allow innocent civilians – including children – trapped in the conflict zone to be hostages to political disagreement any longer,” said Kiener Nellen. “The comprehensive solution to the conflict that is so desperately needed will require much more political will but work on this big goal should not stand in the way of immediate humanitarian steps that can have a real impact for those on the ground.”

The mission by the officers from the OSCE Parliamentary Assembly’s General Committee on Democracy, Human Rights and Humanitarian Questions is focused particularly on issues related to the humanitarian situation, encouraging exchanges of prisoners, demining efforts, and the situation of those displaced by the conflict.

“As we approach the holiday season, I call for all sides to lay down their weapons to allow those in the conflict zone to celebrate with their families without the shadow of shelling and firing,” said Hadjiyianni.

The OSCE Parliamentary Assembly has been active in working for a resolution of the crisis in and around Ukraine including through field visits, and promotion of inter-parliamentary dialogue. In May this year, OSCE PA President George Tsereteli (MP, Georgia) led a visit to Donbas focused on alleviating the humanitarian situation of people impacted by the armed conflict.

The OSCE PA has consistently called for full and sustainable implementation of the Minsk Agreements. The situation in Ukraine was a matter of particular discussion during the OSCE PA’s most recent Annual Session in July 2018, which resulted in the Berlin Declaration.

Kiener Nellen and Hadjiyianni are expected to present their findings following the visit during the upcoming meeting of the OSCE Parliamentary Assembly in Vienna, 21-22 February 2019.