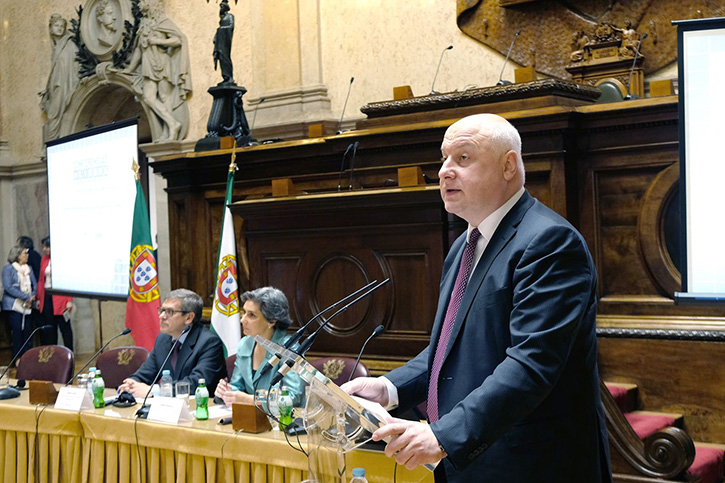 George Tsereteli addressing the Lisbon conference with Jorge Lacao and Isabel Santos listening, 8 May 2018LISBON, 8 May 2018 – Governments, parliaments and international organizations should address the growing challenges associated with information and communications technology (ICT) by enhancing co-operation and implementing policies to bridge gaps in current legal frameworks, participants said today at a conference in Lisbon organized by the Portuguese Parliament and co-hosted by the OSCE Parliamentary Assembly. Ensuring that freedom of information and individual privacy are not infringed upon while countering cyber threats is equally important, they said.

The conference, entitled “Digital Resilience of a Democratic State,” covered topics such as vulnerabilities to electoral systems, technological challenges of cyberspace, sovereignty and digital security, and the threat of cyber-terrorism. It featured the participation of an array of experts, policy-makers and journalists from Portugal, the OSCE and other international organizations.

“In our increasingly digital world, armed conflicts are not the only breeding ground for threats against governments and citizens. In cyberspace, we see new challenges emerging and old challenges evolving,” said OSCE PA President George Tsereteli (MP, Georgia) in his opening remarks.

“Whether the issue is child sexual exploitation, terrorist recruitment, or crimes such as identity theft and fraud, the internet offers new opportunities for criminals and extremists,” he stated. “We must respond effectively and ensure that the response is proportionate.” The President added that governments should avoid “a race to the bottom of weaker privacy protections around the globe.” 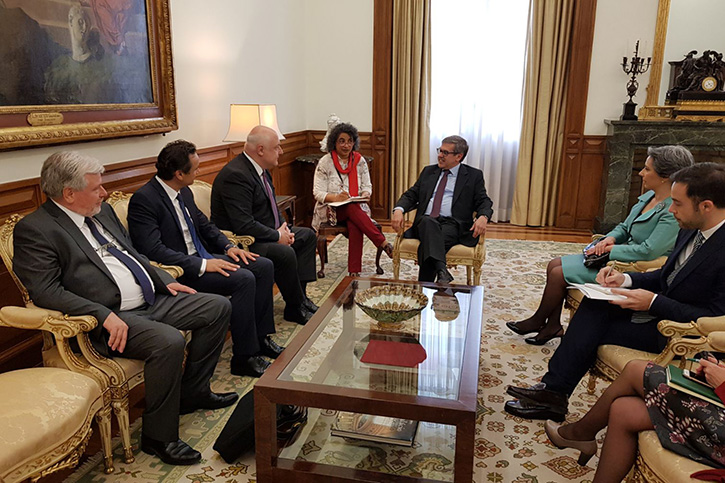 Meeting between the OSCE PA leadership and and the deputy speaker of the Portuguese Parliament, Jorge Lacao, Lisbon, 8 May 2018“Cybersecurity is, along with climate change, one of the most challenging issues in the debate on our collective future. Building an open, free and secure cyberspace is a task we can neither overlook nor neglect,” Santos said. “The ambiguity of the development of cyberspace has fueled global mistrust and tension. I am confident that the Lisbon Conferences will contribute to ongoing dialogue in the Parliamentary Assembly and enhance trust-building in the OSCE area.”

Several other OSCE PA leaders participated in the conference, including human rights committee Chair Ignacio Sanchez Amor (MP, Spain), economic and environmental committee Chair Nilza de Sena (MP, Portugal), and political affairs and security committee Rapporteur Kristian Vigenin (MP, Bulgaria). Panelists discussed the implications of cyber threats and “fake news” on freedom of information, noting the difficulties of addressing questions of sovereignty in a digital world, and stressed that greater political will is needed to meet the challenges of cybersecurity.

Chair of the OSCE PA Ad Hoc Committee on Countering Terrorism Makis Voridis (MP, Greece) spoke at the session on cyber-terrorism, stressing that to address the issue effectively, greater involvement is needed from counterparts in the ICT sector.

Participants from North America, Europe and Central Asia agreed that addressing evolving cybersecurity risks requires a multifaceted approach incorporating the views of various stakeholders. Attention should be paid, they said, to revising existing legal frameworks and harmonizing relevant legislation, in line with international law, to make co-operation more effective and efficient. The OSCE PA’s upcoming Annual Session in Berlin was also highlighted as an opportunity to continue these discussions and adopt strong recommendations in the field of cybersecurity.

Former OSCE PA President Joao Soares and Deputy Head of Portugal’s OSCE PA Delegation Miguel Santos spoke at the closing session. Other speakers at the all-day conference included Jorge Lacao, Vice-President of the Assembly of the Republic; Marcos Perestrollo, Secretary of State for National Defense of Portugal; Rasa Ostrauskaite, Co-ordinator of Activities to Address Transnational Threats of the OSCE; William Sweeney, President and CEO of the International Foundation for Electoral Systems; and Pedro Verdelho, Head of the Cybercrime Office of the Portuguese Attorney General’s Office.

Photos from the conference are available for public use on Flickr.