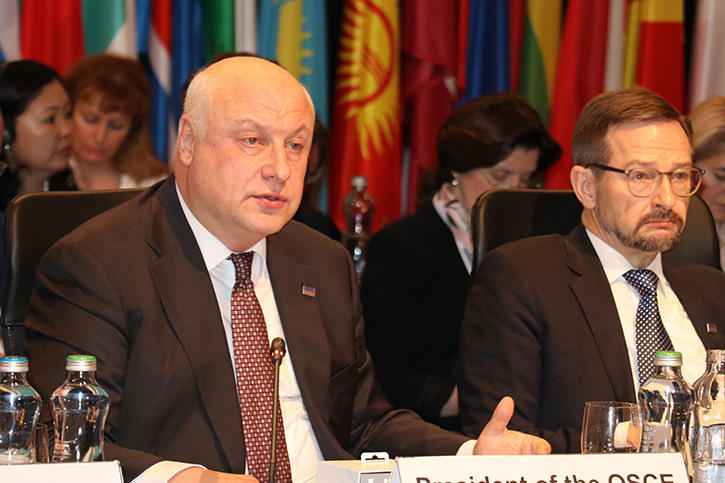 George Tsereteli and Thomas Greminger in Bratislava, 5 December 2019BRATISLAVA, 5 December 2019 – Citizens of the OSCE area need the Organization and its political leaders to implement OSCE commitments and to demonstrate resolve in joint efforts to overcome conflicts and other challenges, Parliamentary Assembly President George Tsereteli (MP, Georgia) said at the opening of the 26th Ministerial Council in Bratislava today.

The meeting is bringing together the foreign ministers of the OSCE’s 57 participating States for two days of deliberations in the capital of Slovakia, which in 2019 has held the Chairmanship of the OSCE.

Highlighting recent tangible achievements in Ukraine, Tsereteli said that the developments are a sign of hope that progress can be made with the help of the OSCE. In several countries, however, there are anti-democratic attempts to consolidate state power, he said, which limits what the OSCE can do.

“In the end, it depends on you, dear Ministers, and your Heads of States and Governments, to allow this organization to be successful,” Tsereteli said. “This is why this gathering is so important to ensure adequate attention by the highest level to the OSCE.”

Three decades after the fall of the Berlin Wall and the Iron Curtain, it is necessary to renew obligations to provide real security, the President said. He highlighted the outcomes of the Parliamentary Assembly’s Annual Session in Luxembourg last summer and its policy recommendations on issues such as unresolved conflicts in the OSCE area, climate change, gender policies, fighting corruption, energy security, and youth engagement.

“It is the hope of the Parliamentary Assembly and the citizens we represent that this Ministerial Council helps unleash the OSCE’s potential,” he said. 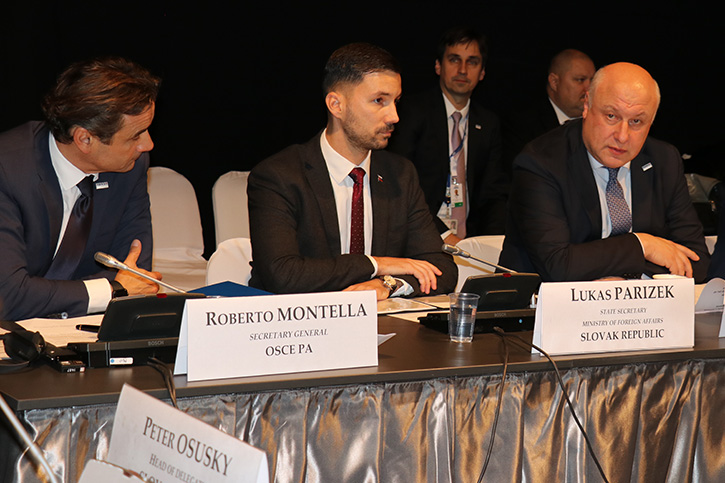 Addressing the meeting, State Secretary Parizek stressed the crucial role parliamentarians play in making the voices heard of the people they represent. “We need you to support the OSCE with your voice in your countries and explain the importance of this unique organization to people. Without this understanding, there will always be a lack of political will and insufficient funding,” he said.

Montella noted the importance of setting strategic priorities that enable the Assembly to work effectively on behalf of the citizens of the OSCE area. Earlier in the day, he attended an OSCE Heads of Institutions Meeting to build synergy with other branches of the OSCE.

Tsereteli and Montella have several bilateral meetings scheduled on the margins of the Ministerial over the next two days.

For the President’s full speech to the OSCE Ministerial Council, please click here.

Photos of the OSCE PA’s participation in Bratislava are available on Flickr.

For more information on the Ministerial Council, please visit www.osce.org.