The OSCE traces its origins to the détente phase of the early 1970s, when the Conference on Security and Co-operation in Europe (CSCE) was created to serve as a multilateral forum for dialogue and negotiation between East and West. Meeting over two years in Helsinki and Geneva, the CSCE reached agreement on the Helsinki Final Act, which was signed on 1 August 1975.

This document contained a number of key commitments on polito-military, economic and environmental and human rights issues that became central to the so-called 'Helsinki process'. It also established ten fundamental principles (the 'Decalogue') governing the behaviour of States towards their citizens, as well as towards each other. 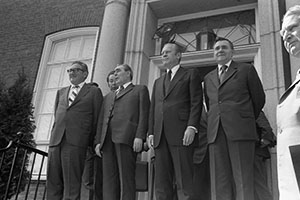 This document contained a number of key commitments on polito-military, economic and environmental and human rights issues that became central to the so-called 'Helsinki process'. It also established ten fundamental principles (the 'Decalogue') governing the behaviour of States towards their citizens, as well as towards each other. 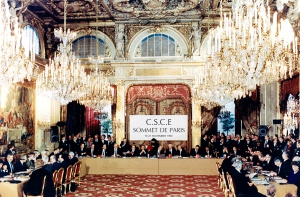 Until 1990, the CSCE functioned mainly as a series of meetings and conferences that built on and extended the participating States' commitments, while periodically reviewing their implementation. However, with the end of the Cold War, the Paris Summit of November 1990 set the CSCE on a new course. In the Charter of Paris for a New Europe, the CSCE was called upon to play its part in managing the historic change taking place in Europe and responding to the new challenges of the post-Cold War period, which led to its acquiring permanent institutions and operational capabilities. In the Charter of Paris, the Heads of State or Government of the CSCE also specifically called for the creation of a CSCE parliamentary Assembly.

In April 1991, at the invitation of the Spanish Parliament, high-level parliamentary leaders from all CSCE participating States gathered in Madrid for the particular purpose of creating a CSCE Parliamentary Assembly, as requested by their respective Heads of State or Government. The result of the meeting was the Madrid Declaration, which set forth the basic rules of procedure, working methods, size, mandate and distribution of votes of the Assembly.

In July 1992, the first formal session of the Parliamentary Assembly was held in Budapest. The Assembly decided, inter alia, to accept an invitation of the Danish Parliament to establish an International Secretariat in Copenhagen.

In 1994, the CSCE was renamed the Organization for Security and Co-operation in Europe due to the expanded role of the organization.

The CSCE-OSCE Summits in Helsinki (1992), Budapest (1994) and Istanbul (1999) reaffirmed the participating States' interest in the active participation of parliamentarians in the OSCE process and mandated the Chairman-in-Office to maintain close contacts with the Parliamentary Assembly, to draw its recommendations to the attention of the Permanent Council and to inform the parliamentarians of OSCE activities.

"The Parliamentary Assembly has developed into one of the most important OSCE institutions continuously providing new ideas and proposals," said the heads of OSCE governments at the close of the 1999 Istanbul Summit. "We welcome this increasing role, particularly in the field of democratic development and election monitoring. We call on the Parliamentary Assembly to develop its activities further as a key component in our efforts to promote democracy, prosperity and increased confidence within and between participating States."

Recognizing the important role parliamentarians can play in the CSCE process, we call for greater parliamentary involvement in the CSCE, in particular through the creation of a CSCE parliamentary assembly, involving members of parliaments from all participating States. To this end, we urge that contacts be pursued at parliamentary level to discuss the field of activities, working methods and rules of procedure of such a CSCE parliamentary structure, drawing on existing experience and work already undertaken in this field.