Parliamentary Dimension of the OSCE

As the parliamentary dimension of the Organization for Security and Co-operation in Europe, whose 57 participating States span the geographical area from Vancouver to Vladivostok, the primary task of the 323-member Assembly is to facilitate inter-parliamentary dialogue to advance the OSCE's goals of comprehensive security.

Recognized as a regional arrangement under Chapter VIII of the United Nations Charter, the OSCE is a primary instrument for early warning, conflict prevention, crisis management and post-conflict rehabilitation in its area. The Parliamentary Assembly, originally established by the 1990 Paris Summit to promote greater involvement in the OSCE by national parliaments in the participating States, also pursues other important objectives which are stated in the preamble of the Assembly's Rules of Procedure. They include:

- to assess the implementation of OSCE objectives by participating States;

- to discuss subjects addressed during meetings of the Ministerial Council and summit meetings of OSCE Heads of State or Government;

- to develop and promote mechanisms for the prevention and resolution of conflicts;

- to support the strengthening and consolidation of democratic institutions in OSCE participating States;

To pursue these objectives, the OSCE Parliamentary Assembly employs a variety of means, including a Final Declaration and a number of resolutions and recommendations that are adopted each year at the Annual Session. Other means include:

- different programmes, including an extensive election observation programme, and various seminars, designed to develop and strengthen democracy; and

- special missions of PA delegations to areas of concern or crisis

The following organizations have observer status in the OSCE Parliamentary Assembly:

- Interparliamentary Assembly of the CIS

- Parliamentary Assembly of the Council of Europe (PACE)

The decision-making bodies of the OSCE PA include the Standing Committee of heads of delegations and the Bureau. Comprised of the President, Vice-Presidents, Treasurer, Officers of the three General Committees and President Emeritus, the Bureau is responsible for ensuring that the decisions of the Standing Committee are carried out, including approval of the annual audited accounts. The Bureau's decisions are taken by two-thirds majority vote. 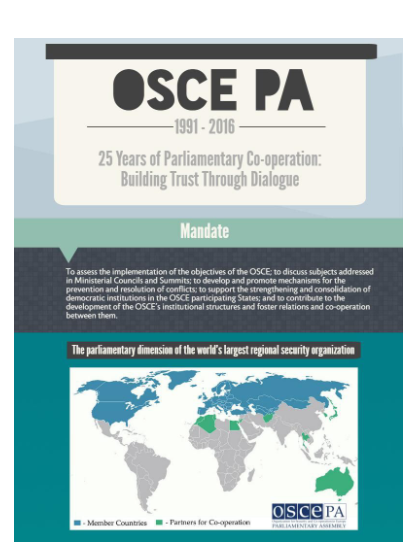