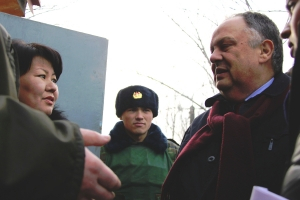 The elections were well administered at the technical level and the observers noted legal changes aimed at ensuring representation of at least a second party in parliament, but the authorities did not provide the necessary conditions for the conduct of genuinely pluralistic elections. Several political parties were blocked from standing and a number of candidates were de-registered without due process.

On election day, voting was assessed positively by the observers, but the counting process significantly lacked transparency and respect for procedures, with cases of fraud noted. In many cases, it was not possible for observers to determine whether voters' choices were honestly reflected.

The legal framework continues to include major inconsistencies with OSCE commitments and other international standards, as it disproportionately restricts freedom of assembly, the free flow of information and freedom of association. The law also includes excessive restrictions on candidate eligibility and the prohibition for independent candidates to stand. It lacks guarantees for the pluralistic composition of election commissions.

There was limited public debate and the media operated in an environment characterized by self-censorship. The political parties that were permitted to compete in the election could campaign largely without interference by the authorities.

The violent clashes in Zhanaozen in December and ensuing emergency measures in the town became a campaign issue. While the limitations to citizen's rights under the emergency rule were prolonged, the authorities decided to hold elections in Zhanaozen on the day.

"If Kazakhstan is serious about their stated goals of increasing the number of parties in parliament, then the country should have allowed more genuine opposition parties to participate in this election," said Special Co-ordinator João Soares who leads the short-term OSCE observer mission and heads the Delegation of the OSCE Parliamentary Assembly.

"These elections proved to be a move in the right direction," said Elsa Papademetriou, the Head of the Delegation of the Council of Europe's Parliamentary Assembly.

"This election took place in a tightly controlled environment, with serious restrictions on citizens' electoral rights. Genuine pluralism does not need the orchestration we have seen – respect for fundamental freedoms will bring it about by itself," said Miklós Haraszti, the head of the Election Observation Mission of the OSCE Office for Democratic Institutions and Human Rights (ODIHR).