VIENNA, 16 January 2020 – Addressing the ambassadors of the 57 OSCE permanent delegations in Vienna today, OSCE Parliamentary Assembly President George Tsereteli reiterated the PA’s support for the priorities of the Albanian OSCE Chairmanship and expressed appreciation for Chair-in-Office Edi Rama’s stated intention to further strengthening the Chairmanship’s work with parliamentarians. He also welcomed Sweden as a new member of the OSCE Troika and expressed his appreciation for Poland’s readiness to chair the organization in 2022. 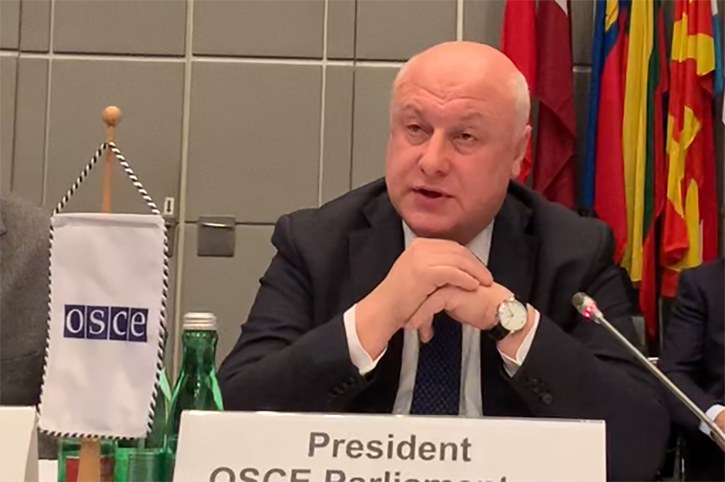 PA President George Tsereteli addresses the OSCE Permanent Council in Vienna on 16 January 2020.The OSCE region, Tsereteli said, continues to suffer from serious disagreements on key political and security issues, yet it must be understood that multilateralism is the only way forward.

“It has been the OSCE Parliamentary Assembly’s overarching goal to support that objective,” President Tsereteli said. “Our ability to collectively support multilateralism has been considerably increased in recent years through wider synergies and deeper collaboration between the OSCE Parliamentary Assembly and all components of the OSCE executive structure.”

The President highlighted the sharp escalation in tensions between the United States and Iran over the past several weeks as a cause for international concern and expressed condolences to the families and nations affected by the tragic downing of the Ukrainian international flight in Tehran on 8 January.

The OSCE area’s conflicts also featured in his remarks, with the President noting that the PA has been active in Ukraine advocating for practical steps to benefit the people living in areas affected by the hostilities in the Donbas.

He reported on his visit to Kyiv last month, where he held substantive conversations with Chairman of the Verkhovna Rada Dmytro Razumkov, Foreign Minister Vadym Prystaiko, parliamentary and other leaders as well as the leadership of the OSCE’s Special Monitoring Mission to Ukraine. The visit was an occasion to reiterate the OSCE PA’s firm dedication for a peaceful resolution of the conflict through political and diplomatic means, Tsereteli said, and to stand firmly behind Ukraine’s sovereignty and territorial integrity.

“I welcome the recent high-level dialogue between Ukraine and the Russian Federation,” the President said. “The exchange of detainees, the repair of the Stanytsia Luhanska bridge, continued disengagement, and a commitment to opening additional crossing points are all rays of hope.”

He noted that what is needed now is to build on this momentum to follow up swiftly, in order to facilitate substantive results at the next meeting of the Normandy Four leaders and keep full implementation of the Minsk agreements high on the agenda of all sides.

On the Nagorno-Karabakh conflict, Tsereteli highlighted his many conversations with the leaderships of Armenia and Azerbaijan to explore ways parliamentarians can advance peace in the South Caucasus.

He also addressed the issue of the illegal borderization in Georgia, which he stressed is in breach of international law and agreements, and adds to the precariousness and difficulties of daily life in and near the occupied territories. He thanked participating States and OSCE structures for their efforts to release Dr. Vazha Gaprindashvili.

President Tsereteli highlighted several areas of work of the OSCE PA, including its ad hoc committees on migration and terrorism and its election observation activities. He noted that 2019 was a busy year of election observation which concluded with the PA’s first-ever mission to Uzbekistan. He noted that despite the shortcomings identified by observers, the election was a step forward in Uzbekistan’s democratic development and revealed that democratic consolidation now seems more visible in Central Asia.

Today’s speech was the fifth time President Tsereteli has addressed the Permanent Council, the principal decision-making body of the OSCE which brings together the ambassadors of the 57 participating States every week.

For a video of his remarks, please click here.

The remarks are available in PDF format here.