Young parliamentarians gather in Washington D.C. to discuss the role of youth in leading responses to emerging crises

WASHINGTON D.C., 4 February 2020 – Young parliamentarians gathered in Washington D.C. on 3-4 February for a seminar on “Future Leadership for Political inclusion in the OSCE Region” hosted by the United States Helsinki Commission.

The seminar brought together some 35 parliamentarians from 19 OSCE participating States and three partner States, along with experts from NGOs and think tanks to discuss the role of young people in peace and security efforts in both national and international fora. 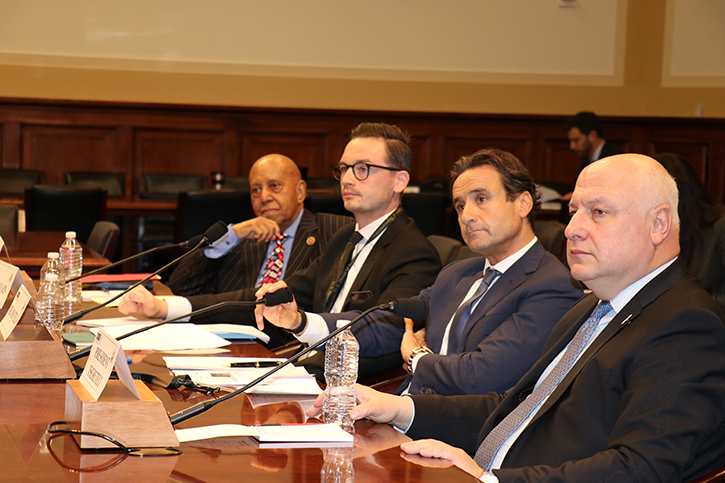 Chair of U.S. Helsinki Commission Alcee Hastings, Presidential Advisor Loic Poulain, Secretary General Roberto Montella and President George Tsereteli, 4 February 2020“This was an excellent opportunity to follow up on a call made by our Assembly during our Berlin Annual Session to establish a forum of young parliamentarians to foster greater mutual trust between OSCE participating States”, said President Tsereteli in his closing remarks. “Young people can play a crucial role in fostering a culture of peace, in the prevention and resolution of conflicts, in tackling current urgent issues such as climate change, the fight against terrorism and migration.”

He added: “Occasions like this strengthen the role of young leaders in the OSCE region and in the world, and it is my wish that we now find together effective ways to institutionalize this kind of initiative.”

Welcomed and briefed by the Chair of the Helsinki Commission and Head of the U.S. Delegation Alcee Hastings, participants took part in working sessions led by young parliamentarians and experts that addressed political inclusion for future leadership in the three dimensions of the OSCE. Parliamentarians had also the possibility to participate in breakout sessions on inclusive economic growth, leadership development, and effective engagement in multilateral organizations.

As part of the seminar, Secretary General Roberto Montella and Presidential Advisor Loic Poulain engaged with parliamentarians in a discussion on OSCE PA election observation.