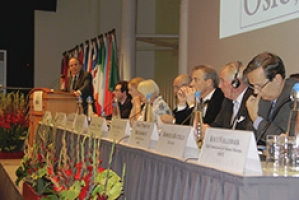 Almost 250 parliamentarians have gathered for the Annual Session, which will run all week and end with the elections on Saturday of new officers, including the Assembly’s successor to President Joao Soares (Portugal). The two presidential candidates are Petros Efthymiou (Greece) and Consiglio Di Nino (Canada).

Opening the 19th Annual Session in Oslo on Tuesday, OSCE PA President Joao Soares underlined the timeliness and importance of the topics of discussion for the week, not the least of which being the situation in Kyrgyzstan.

The Speaker of the Storting, Dag Terje Andersen, offered in his remarks condolences to the victims of the recent violence in Kyrgyzstan. “We, the OSCE parliamentarians, must support the country in maintaining peace and continuing its democratic development,” he said.

Mr. Andersen also pointed to the relevance of the Annual Session’s theme, “Rule of Law: Combating Transnational Crime and Corruption,” emphasizing that “transnational crime and corruption are having negative effects on all OSCE countries and citizens everyday.”

Jonas Gahr Store, Minister of Foreign Affairs of Norway, highlighted the unique ability of the OSCE to tackle these common problems.

“The organization’s broad membership and its comprehensive approach to security are two of its hallmarks and greatest strengths,” he said. “New threats from terrorism, trafficking and climate change mean that a broad perspective is more needed than ever, and a strengthened political dialogue must be at its core.”

OSCE Secretary General Marc Perrin de Brichambaut, representing the Kazakh Chairmanship, also addressed the opening session and answered questions from the assembled parliamentarians. Support for an OSCE Summit of Heads of State and Government was expressed and Ambassador de Brichambaut reiterated the Chairmanship’s commitment to holding one this year.

The debate on the situation in Kyrgyzstan was introduced by Kimmo Kiljunen, the Assembly’s Special Representative for Central Asia, who also reported on his recent visit to the region. As part of the discussion, the OSCE High Commissioner on National Minorities Knut Vollebaek and Secretary General de Brichambaut briefed the Assembly on their on-going work.

Kyrgyzstan’s deputy head of the provisional government, Omurbek Tekebaev, also addressed the Assembly, providing relevant context for the recent unrest in his country and highlighting the importance of fighting corruption.

“Actual preparedness of any state to combat organized crime and corruption is ensured through the development of transparent, accountable to society, institutions of the political system,” Mr. Tekebaev noted.

The Assembly's Special Representative on Gender Issues, Tone Tingsgaard, soon to be stepping down as member of the Swedish parliament, gave her last report on the question of gender balance within the OSCE. She said that she had noticed progress during the seven years as Special Representative but that the OSCE "has a long way to go before it reaches the status of a gender equal organization which properly mainstreams its work."