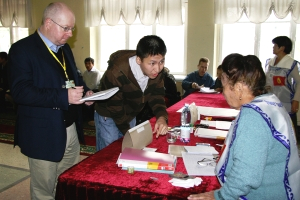 Morten Hoeglun performs election observation in Bishkek.BISHKEK, 11 October 2010 – Marked by political pluralism and a vibrant campaign, yesterday’s parliamentary elections in Kyrgyzstan constituted a further consolidation of the democratic process and brought the country closer to meeting its international commitments on democratic elections, international observers concluded in a preliminary statement issued today. They stressed, however, that there remains an urgent need for a profound reform of the electoral legislation.

“I was impressed by the political pluralism, the civic responsibility and the spirit of the people of this country. I have observed many elections in Central Asia over the years but this is the first election where I could not predict the outcome. This election reflected the will of the people of the Kyrgyz Republic,” said Morten Høglund, appointed as Special Coordinator to lead the short-term OSCE observer mission and Head of the delegation of the OSCE Parliamentary Assembly.

“The people of Kyrgyzstan have expressed their determination to turn a page in their history and to proceed towards a stable and effective democracy. The international community will take full account of this and expects the political parties to respect the results and form a stable government which can deliver a better future for Kyrgyzstan,” said Katarína Neved’alová, Head of the delegation of the European Parliament.

“I was very glad to see that these elections took place in a peaceful atmosphere. The last few weeks show that Kyrgyzstan can hold elections marked by pluralism, an independent election administration and respect for fundamental freedoms. Now the challenge is to stay on course and tackle the remaining shortcomings,” said Corien Jonker, Head of the long-term election observation mission deployed by the OSCE Office for Democratic Institutions and Human Rights (ODIHR).

The observers noted that the inclusive registration process resulted in a pluralistic field of political parties which provided voters with a genuine choice. The campaign was highly competitive and took place in a peaceful atmosphere despite underlying tensions following the June violence. Political parties were generally able to campaign freely without major impediments or incidents. Overall, fundamental freedoms were respected. The central election commission operated independently and enjoyed the confidence of electoral stakeholders.

On election day, voting proceeded in a calm, orderly and transparent manner, although the presence of unauthorized persons in polling stations remains a concern. In some cases these persons interfered in the process. The counting was assessed much less positively, with observers noting procedural violations and problems with completing protocols. In a positive move, the central election commission published results broken down by polling stations throughout election night.

The state media met their obligation to provide free airtime and print space to all contestants. Generally, the media covered the campaign only through the broadcasting of paid advertisements. This allowed voters to form opinions on political alternatives, but made it difficult for them to make a fully informed choice due to the lack of impartial and analytical information.

The observers noted that the legal framework for elections is not yet consistent with the constitution and is in urgent need of comprehensive reform. The quality and accuracy of voter lists remained a serious concern. This could affect the composition of the new parliament as parties must surpass thresholds calculated on the basis of the number of registered voters. In addition, deficiencies in the residency registration system resulted in the disenfranchisement of thousands of internal migrants and people displaced by the June violence.