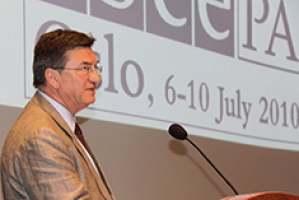 Mr. Efthymiou, who was a Vice-President in the Assembly, defeated Senator Consiglio Di Nino (Canada) by 130 votes to 64. The new President succeeds Joao Soares (Portugal) who has served as President for two one-year terms.

In his address to the Assembly upon being elected, Mr. Efthymiou laid out two key priorities of his presidency: one, increasing the effectiveness of the PA’s work, “with a balanced approach to our agenda and a policy of equality towards all participating members,” and two, ensuring “a stronger role for the PA itself, with the enhancement of its position, both within the OSCE and in relation to our governments and other international organizations.”

The Oslo Declaration, available in English, French and Russian, contains the resolutions adopted during the Annual Session in Oslo, in which 250 parliamentarians participated. The resolutions spanned a wide range of issues, from the situation in Kyrgyzstan to the Parliamentary Assembly’s involvement in the OSCE Corfu Process, the peace process in the Middle East, nuclear security, cybercrime, the situation in the Arctic, investigative journalism, and the death penalty.