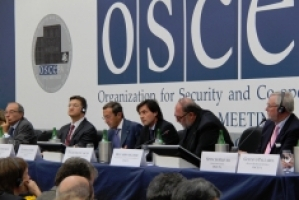 PALERMO, 9 October 2010 – Organized crime remains one of the most pressing problems worldwide, said OSCE PA President Petros Efthymiou today. He expressed his confidence that the discussions in the next two days at the Fall Meetings will be a useful and effective guide in dealing with this problem.

Mr. Efthymiou’s speech today led off the conference at the PA’s Fall Meetings in Palermo titled, “The Fight Against Transnational Organized Crime and Corruption,” which take place ten years after the adoption of the Palermo Convention on organized crime, money laundering and obstruction of justice. He said he was pleased that crime and corruption is the main topic of the Assembly this year and he called for national parliaments to undertake an analysis of the levels of corruption in their public administrations by establishing specific parliamentary committees.

“We should examine our own work, we need transparent and enforceable procedures for waiving parliamentary immunities in cases of criminal acts or ethical violations,” President Efthymiou said. “We can all contribute to combating organized crime.”

Also speaking during the opening session of the two day conference, the OSCE Chairperson-in-Office, Kazakhstan's Foreign Minister and Secretary of State Kanat Saudabayev said tomorrow's parliamentary elections in Kyrgyzstan will be crucial for the country's future and difficult tasks await those elected said at an OSCE Parliamentary Assembly meeting today.

"I would like to urge once again the Kyrgyz authorities and all political forces of that country to ensure that the democratic will of the people is reflected to the full extent and to exercise responsibility and wisdom in the post-election period," he said, noting that Kyrgyzstan will be discussed at the OSCE Summit, to be held 1-2 December in Astana. Other Summit topics the Kazakh OSCE Chairmanship wants to include are the reaffirmation of OSCE commitments, the recommitment of OSCE participating States to an inclusive Euro-Atlantic and Eurasian security community, the redoubling of efforts to address challenges to human rights, fundamental freedoms, intolerance and discrimination throughout the OSCE area, and the intensification of collective efforts to combat new and emerging transnational threats, including those emanating from Afghanistan.

At the Summit, he also said, the OSCE participating States could start a "process of consolidating a community of truly united and indivisible security in the Euro-Atlantic and Eurasian region based on shared values, principles and commitments."

"The OSCE is and will be a key factor in solving the most important issues of security and co-operation in a vast Euro-Atlantic and Eurasia space," Mr. Saudabayev concluded.

The sessions on “Ten Years after the Adoption of the Palermo Convention” and “The Fight Against Corruption” contained lively debates after introductory remarks by a series of keynote speakers, including Italy’s Interior Minister, Roberto Maroni, the Chief Prosecutor of the National Anti-Mafia Bureau, Pietro Grasso, Italian Justice Minister Angelino Alfano, and representatives from OECD and Transparency International.

The OSCE PA Fall Meetings opened on Friday, 8 October in Palermo with welcoming addresses by OSCE PA President Petros Efthymiou and leading Italian parliamentarians such as Gianfranco Fini, President of the Italian Chamber of Deputies, and Francesco Casio, President of the Sicilian Regional Assembly, and the head of the Italian delegation to the PA, Riccardo Migliori.

Over 200 OSCE parliamentarians have gathered in Sicily’s Regional Assembly, Palazzo dei Normanni, to attend the opening morning session and the day-long Mediterranean Forum which consisted of sessions on economic and infrastructure co-operation as well as cultural and environmental co-operation in the Mediterranean basin.

President Efthymiou said that he hoped that the Assembly’s work on Mediterranean, which has grown steadily, will continue to grow, as it is an area of critical geostrategic importance. Despite occasional conflicts, he said, the area offers “possibility for significant development through the best use of business, scientific and cultural activities.”

The OSCE must be actively present, Mr. Efthymiou continued, and it is “imperative” that we consider the broader political agenda and meet major challenges. It is important, he said, to promote economic progress in the south in order to alleviate migration pressures in the north, as well as ensure the protection of the ecological system and promote inter-cultural understanding.