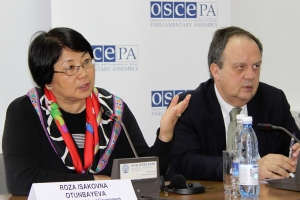 Roza Otunbaeva with Joao Soares at a roundtable discussion, 17 May 2010.BISHKEK, 17 May 2010 – A delegation of senior OSCE parliamentarians today called upon the provisional government and people of Kyrgyzstan to work together to ensure security, stability, and democracy for their country.

“The quick action by the provisional government to remedy errors of the past through creating a new constitution is important. Now it is up to all of the people of Kyrgyzstan to maintain a constructive dialogue among political forces and civil society as this process moves forward. While maintaining Kyrgyzstan's respect for political pluralism, I hope that all forces can unite and move forward in restoring stability and democracy,” said OSCE Parliamentary Assembly President Joao Soares, who leads the delegation.

“At the end of the 40-day mourning period, I express my deep condolences to the families of those who died in last month's unrest. Further violence will only cause further tragedy; I urge all people in Kyrgyzstan to exercise restraint, and engage in a political process in the interests of the whole country,” said Mr. Soares.

The delegation was briefed on the many challenges facing the country, in particular the economic difficulties caused by the closure of borders with neighbouring countries, including the key border with Kazakhstan. Members expressed their willingness to work to overcome these difficulties.

“The OSCE PA is ready to support the Provisional Government in a process of political reconciliation in Kyrgyzstan, as the country moves forward in key democratic reforms,” said Kimmo Kiljunen, the Parliamentary Assembly's Special Representative on Central Asia.

Following the unrest and overthrow of the previous government of Kyrgyzstan, President Soares appointed Adil Akhmetov of Kazakhstan as his Special Envoy to assess the situation and to work closely with others in the OSCE and international community to consider how to contribute to peace and stability in Kyrgyzstan.

Parliamentarians from across the OSCE will remain actively engaged and follow the ongoing processes in Kyrgyzstan. As an Assembly of 320 Members of Parliament from OSCE countries, the OSCE PA includes Members with a wide range of experience and expertise including in reforming institutions. The delegation expressed its willingness to support discussions together with a new parliament later this year.

The OSCE PA delegation to Kyrgyzstan included Members of Parliament from Denmark, Finland, Italy, Kazakhstan, Portugal and Russia. The Secretary General of the Assembly, Spencer Oliver, also participated in the visit which was supported by the OSCE Centre in Bishkek.