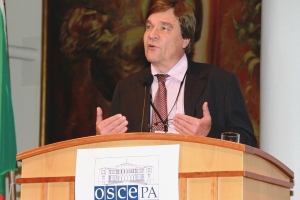 Kimmo Kiljunen introducing a resolution on the situation in Kyrgyzstan at the OSCE PA’s recent Annual Session in Oslo.COPENHAGEN, 28 July 2010 – Having just returned from Bishkek, the OSCE PA’s Special Representative for Central Asia, Kimmo Kiljunen (Finland), spoke today about the progress being made in organizing an International Independent Commission for Inquiry into the violence that occurred in southern Kyrgyzstan in June.

“I am answering the call for an independent, international inquiry into tragic events in southern Kyrgyzstan,” Mr. Kiljunen said. “In leading this International Independent Commission for Inquiry, I hope to gather all relevant parties in a joint effort intensifying this important task and its contribution to the reconciliation process in the country,” added Mr. Kiljunen, who has been asked by Kyrgyz President Roza Otunbaeva to lead the investigation.

Mr. Kiljunen has been in Kyrgyzstan for the past week meeting with senior officials of the provisional government in Bishkek, including the deputy foreign minister. In a letter sent to the UN Secretary General on 21 July, the Government of the Kyrgyz Republic requested support for the International Independent Commission.

The Special Representative has stated that the international commission should include the OSCE, the EU, the UN and the Commonwealth of Independent States. Co-operation with other organizations such as the Collective Security Treaty Organization and the Shanghai Co-operation Organization will also be explored.

OSCE PA President Petros Efthymiou made it clear that he supports Mr. Kiljunen’s efforts. “I am pleased to offer my support to Kimmo Kiljunen; his extensive experience of working with Central Asia for more than a decade makes him eminently qualified to fulfil this role,” Mr. Efthymiou said.

Mr. Kiljunen will travel to Geneva and Moscow next week to continue building support for the investigation. Already, several European countries have pledged diplomatic and financial support. Robert Blake, Assistant Secretary in the U.S. State Department’s Bureau of South and Central Asian Affairs, testified to the U.S. Helsinki Commission on 27 July that “the United States welcomes President Otunbaeva’s decision” to ask Mr. Kiljunen to organize the investigation.

Since the violence in southern Kyrgyzstan, Mr. Kiljunen has regularly visited the country, meeting with a range of political interlocutors, including President Roza Otunbaeva, her Deputy in charge of Constitutional Reform Omurbek Tekebaev, as well as with a wide range of representatives of political parties, media, non-governmental organizations, and the international community.

On 6 July, Ms. Otunbaeva, a former member of the OSCE Parliamentary Assembly, formally asked Mr. Kiljunen to “co-ordinate the preparation process for the International Independent Commission for Inquiry” into the tragic events in June “in co-operation with the National Commission on Investigation.”

Following this request, the OSCE PA adopted a resolution on the situation in Kyrgyzstan at its 19th Annual Session in Oslo. The resolution, which is included in the Oslo Final Declaration, “supports calls for an international investigation into the causes of violence in southern Kyrgyzstan” and “recommends that the OSCE and other international institutions help the Provisional Government investigate the real reason for the interethnic violence in Osh and determine who instigated this inhuman act.”

During the debate on the resolution, Kyrgyzstan’s Deputy Head of the Provisional Government, Omurbek Tekebaev, welcomed the call for an international investigation, pointing out that it would benefit not just Kyrgyzstan, but neighbouring countries as well.

Mr. Kiljunen, a Member of the Finnish Parliament, has served as OSCE PA Special Representative for Central Asia since May 2007. He has long been active in the Assembly, having served as Vice-President, as Vice-Chair and Chair of the General Committee on Political Affairs and Security, and as Chair of the Parliamentary Team on Moldova.