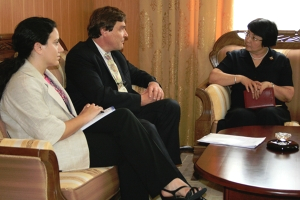 Mr. Kiljunen met with a range of political interlocutors, including Interim President Roza Otunbaeva, her Deputy in charge of Constitutional Reform Omurbek Tekebaev, as well as with a wide range of representatives of political parties, media, non-government organizations, and the international community.

In his meetings, Mr. Kiljunen expressed support for pluralistic parliamentary democracy in the country, including the importance of developing political parties ahead of key parliamentary elections in the coming months.

"Of course, we understand that conducting a referendum under the current circumstances is not easy, but not conducting the referendum at this stage would be even worse” said the Special Representative at a press conference in Bishkek today. “Supporting democratic processes in Kyrgyzstan at this difficult time for the country is important to the future of democratic elements in the region more widely.”

Kimmo Kiljunen deplored the recent violence in southern Kyrgyzstan and echoed the call for an international investigation into the events. He also highlighted the need for continued assistance to Kyrgyzstan, including possible peacekeeping or policing operations under the auspices of the United Nations and regional security organizations. He noted that the OSCE can offer particular expertise in the field.

The OSCE PA looks forward to observing the key parliamentary elections to take place in the coming months.

The Parliamentary Assembly will debate a resolution on the situation in Kyrgyzstan at its Annual Session in Oslo, 6-10 July 2010.

This week’s visit is facilitated by the OSCE Centre in Bishkek.