Resolution on PA involvement in the Corfu Process approved 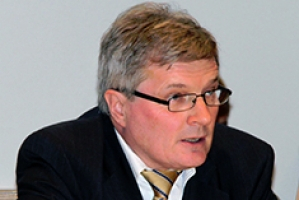 Johannes Koskinen, Chair of the OSCE PA's Transparency and Accountability Committee, introduces the resolution on strengthening the role of the Parliamentary Assembly in the Corfu Process.OSLO, 10 July 2010 -- One of the major resolutions debated at the Oslo Annual Session, introduced in a plenary by the Chair of the OSCE PA’s Transparency and Accountability Committee, Johannes Koskinen (Finland), welcomes the OSCE Corfu Process, which seeks to revive the multilateral political dialogue on challenges to security in the OSCE area.

The resolution highlights the importance of a parliamentary dimension in the on-going dialogue on security issues and welcomes the expanded mandate of the OSCE PA’s Committee on Transparency and Accountability, which is tasked with strengthening parliamentary involvement in the Corfu Process.

During the debate, parliamentarians stressed the important link between the Assembly and the governmental side of the Organization. It was mentioned, however, that a lack of political will prevents action on Assembly resolutions.

Also debated in the plenary session on Friday was a Supplementary Item on the situation in Kyrgyzstan, introduced by Kimmo Kiljunen (Finland), the Assembly’s Special Representative for Central Asia. Recognizing that the recent unrest in southern Kyrgyzstan was not reflected in the original drafting of his resolution, he welcomed an amendment that calls for an international investigation into the causes of the violence.

Kyrgyzstan’s deputy head of the provisional government, Omurbek Tekebaev, welcomed the call for an international investigation, pointing out that it would benefit not just Kyrgyzstan, but neighbouring countries as well.

The Kyrgyzstan resolution calls on the international community to maintain its commitment to supporting the country, specifically recommending that the OSCE and other international actors continue to work closely with civil society and media representatives in dealing with the political crisis.

Following the adoption of five amendments, the resolution was agreed to unanimously. Along with all other Supplementary Items, it will be included in the Oslo Final Declaration.