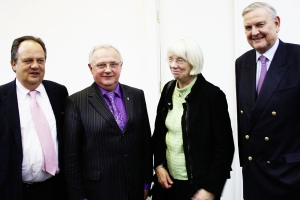 COPENHAGEN, 13 January 2010 – In a final week of preparation for the observation mission to the 17 January presidential election in Ukraine, OSCE Parliamentary Assembly President Joao Soares led a delegation to several regions of Ukraine. The delegation included the Deputy Heads of Mission that Mr. Soares has appointed for the regions: Francois-Xavier DeDonnea in Odesa and Tone Tingsgaard in Donetsk.

President Soares will observe the voting on election day in Kyiv and has appointed deputies to lead OSCE PA observer teams in regions throughout the country, including in Donetsk, Kharkiv, Kyiv, Lviv, Odesa and Simferopol. OSCE PA observers will be thoroughly briefed in Kyiv later this week, before deploying around the country to observe on election day itself. The OSCE observation mission, comprising both the OSCE PA and OSCE ODIHR, works in close co-operation with parliamentarians from the Council of Europe, NATO, and the European Parliament.

In Odesa and Donetsk, the delegation met with representatives of District Election Commissions, which have been playing a key role in preparations for the election on 17 January, and with local political activists on behalf of candidates. The delegation was briefed by ODIHR long-term observers who have been in the two regions for more than one month, and who provided strong support to the delegation. In Odesa, the President and his team also met with the Mayor of the city, Mr. Eduard Gurvits, and in Donetsk, with the Chairman of the Oblast Council, Mr. Anatoli Blyzniuk.

Mr. Soares now returns to Kyiv to lead the OSCE short-term observers and to deliver the post-election statement on behalf of the OSCE at a press conference on Monday. He has been appointed OSCE Special Co-ordinator for the election by the OSCE Chairman-in-Office, Kazakhstan’s Foreign Minister Kanat Saudabayev.

The President also was in Kyiv in November 2009, at which time he met with many of the candidates in the election as well as with representatives of the Parliament, Central Election Commission, Supreme Court, media and civil society.