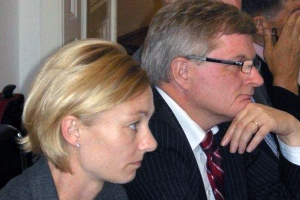 Deputy Secretary General Tina Schoen and the Chair of the Transparency Committee, Johannes Koskinen, meeting in Vienna.VIENNA, 8 September 2010 – Members of the OSCE Parliamentary Assembly’s Ad Hoc Committee on Transparency and Accountability met in Vienna on 6 September with the Chairman of the Permanent Council, the ten ambassadorial Co-ordinators of the Corfu Process and the OSCE Secretary General.

The aim of the visit was to explore the possibilities for the OSCE PA to provide input into the Corfu Process leading up to the 2010 OSCE summit in Astana in line with the expanded mandate of the Ad Hoc Committee. Headed by the Chairman of the Committee, Johannes Koskinen from Finland, the visit also included Petur Blondal, Iceland; Vilija Abramikiene, Lithuania; Pawel Poncyljusz, Poland; Suzana Grubjesic, Serbia; Roberto Battelli, Slovenia and Goran Lennmarker, Sweden as well as staff of Committee Members from Germany, Lithuania and the United Kingdom.

OSCE Secretary General Ambassador Marc Perrin de Brichambaut gave an overview of the Corfu Process, including crisis management, human rights and democracy, the debates on the legal status of the OSCE, and the budgetary process. Regarding co-operation with the OSCE PA, the Secretary General surprised members with his opinion that since the relationship has never been legally codified, OSCE Institutions do not have a mandate to co-operate with the Assembly and that co-operation offered by them takes place on an exclusively voluntary basis.

The PA’s Special Representative in Vienna, Ambassador Andreas Nothelle, explained that the institutional setting created by the Charter of Paris, which includes the PA as an integral element of the OSCE, obliges OSCE Institutions to co-operate with each other. Noting that co-operation has been good with most parts of the OSCE executive structures, he pointed out that even when explicit rules for co-operation exist and have been endorsed by the Ministerial Council, some officials, in particular within the ODIHR, act as if it is their choice to which extent they follow these rules.

Members of the Ad Hoc Committee stressed the importance of increasing transparency, as well as the need for further strengthening the OSCE by improving the efficiency of decision-making. PA Special Representative on the OSCE Budget Petur Blondal quoted from the 2005 report of the British External Auditors and asked why there had not been a follow-up to their recommendation to create a paid, professional and more long-term audit process conducted by independent outside auditors selected through a competitive selection process, in line with international standards.

The Secretary General replied that since the OSCE does not have funds to pay for auditors, the Organization has to rely on voluntary offers coming from national Supreme Audit Institutions, leaving no room for competition. Mr. Blondal also requested Mr. Perrin de Brichambaut to consider whether it would not be more in line with democratic procedures to have the PA appoint the auditors.

The ten ambassadors who serve as “Corfu Co-ordinators” have been tasked by the Kazakh Chairmanship each with an area of responsibility linked to the three baskets of the OSCE, organizational reform aspects, cross-dimensionality and co-operation with other international organizations. In the meeting with the Members of the Transparency Committee, the ambassadors gave an overview of their work, outlining priorities leading up to the summit as well as challenges ahead. The Corfu Co-ordinators supported the OSCE PA initiative to engage in the discussions within the Corfu Process and welcomed further input from the Assembly.

The meeting with the Chair of the Permanent Council Ambassador Kairat Abdrakhmanov provided an opportunity to discuss the plans and preparations for the upcoming summit in Astana. Ambassador Abdrakhmanov stressed the role of the summit, not only for the future of the OSCE, but for the development of Kazakhstan and the entire region of Central Asia. He thanked the OSCE Parliamentary Assembly for its support to the Chairmanship, especially during the discussions on whether or not to have a summit in 2010. The ambassador expressed that this support had indeed been crucial for reaching an agreement on the summit.