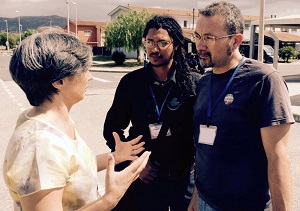 Chairperson Isabel Santos (left) speaks with NGO workers at a reception center for asylum-seekers in Mineo, Italy, 21 June 2015.COPENHAGEN, 19 August 2015 – Putting up barriers will not solve the deepening crisis concerning migrants and refugees in Europe, but a policy based on solidarity and respect for human lives will, OSCE Parliamentary Assembly humanitarian Chair Isabel Santos (MP, Portugal) said in a statement today.

“It is deeply disturbing that some European governments and lawmakers appear content to turn their backs on those who have fled their homelands in search of basic safety and human dignity. Building new walls may seem like a ‘quick fix,’ but it does nothing to address the root causes of this crisis. European countries must also acknowledge that a lasting solution means better sharing the burden of legitimate asylum-seekers and refugees,” Santos said.

The Chairperson of the OSCE PA’s Committee on Democracy, Human Rights and Humanitarian Questions noted that there was a record number of migrants reaching EU borders in July. She also noted reports that British Home Secretary Theresa May and French Interior Minister Bernard Cazeneuve will meet on 19 August regarding the situation in Calais, France.

“As Europeans, how can we allow this humanitarian tragedy to unfold before our eyes? It is shocking that more than 2,000 migrants have died in the Mediterranean this year, as is the recent situation in Calais. While Europe cannot become responsible for all of those affected by war and suffering in the world, we have a moral obligation to do much more than what we are currently doing. We must prioritize solidarity and the fact that real human lives are at stake in our policy-making,” Santos said.

She also urged government officials and her fellow lawmakers to recall that modern Europe has benefited greatly from the contribution of migrants.

The OSCE PA’s Helsinki Declaration, approved by the Assembly at its Annual Session last month, includes calls for OSCE participating States to “increase their efforts to care for people fleeing their homes out of fear of persecution and personal safety, and to ensure the safe and dignified return of IDPs and refugees to their places of permanent residence”; “improve mechanisms for co-ordination and co-operation of immigration policies”; and “address the specific situation of migrant children.”

During a visit to southern Italy in June, Santos called for reform of the European Union’s Dublin Regulation and encouraged the creation of “advance” facilities in the countries from which Europe-bound refugees are most often fleeing.