Multifaceted approach to migrant crisis the only way to overcome it, says OSCE PA’s Santos on European trip 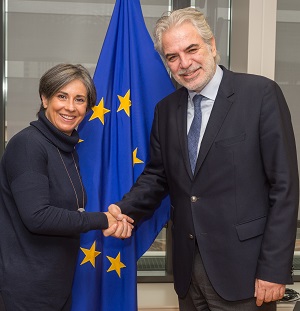 Chairperson Isabel Santos (left) and European Commissioner for Humanitarian Aid and Crisis Management Christos Stylianides, Brussels, 16 November 2015 (photo courtesy of the European Commission)COPENHAGEN, 18 November 2015 – The Chairperson of the OSCE Parliamentary Assembly's Committee on Democracy, Human Rights and Humanitarian Questions, Isabel Santos (MP, Portugal), today completed a visit to Brussels and Geneva for meetings with leading European officials on the crisis of migrants and refugees. She advocated a multifaceted approach as the only way to achieve a durable solution.

“The current crisis that we are facing will only be overcome if we approach it from multiple angles and successfully co-ordinate the wide range of efforts and actors. There is no quick and easy fix. We need to better implement the existing tools and capacities that the EU and the international community have, but also think outside of the box. Steps could range from an expansion of the mandate and budget of Frontex, to new vocational training programs and incentives for employers to hire migrants,” Santos said following her meetings.

She also emphasized the need to improve communication between countries affected by the crisis, which is currently insufficient, better integrate civil society into the response, and better track initiatives to avoid duplication and fill gaps.

Santos further noted that the OSCE and its Parliamentary Assembly can play a greater role in supporting dialogue to reduce international tensions stoked by the crisis; helping to co-ordinate efforts; and conveying a clear message of solidarity and tolerance.

In Brussels on 16-17 November, the Chairperson met with Christos Stylianides, the European Commissioner for Humanitarian Aid and Crisis Management and former Head of the Cypriot Delegation to the OSCE PA; Nahima Lanjri, the Head of the Belgian Delegation to the OSCE PA; several Members of the European Parliament working on migration policy; advisers from the cabinet of European Commission First Vice-President Frans Timmermans; and experts from Carnegie Europe and the Migration Policy Institute Europe.

“While Europe is only facing a fraction of the global crisis of migrants and refugees, it is enough for some countries to experience fatigue. That is primarily due to lack of solidarity and unwillingness to share burdens. Now, in the wake of the Paris tragedy, the situation has become even more politically and emotionally charged. But it is simply unacceptable to equate those who are fleeing terror and violence with the disturbed individuals who commit terrorist attacks, or to use this false logic to justify locking our doors. What we need is solid screening and identification procedures, which will help inspire confidence, as well as better integration mechanisms,” Santos said.

The Chairperson and several of her interlocutors also noted that building walls not only contravenes humanitarian norms, but is ineffective, given the adaptability of migration routes.

They further stressed that better regulating the flow of migrants and refugees will reduce the risk of criminal activity linked to human smuggling and trafficking.

An immediate focus of the international community must also be to provide adequate assistance to migrants during the winter season, Santos emphasized.

The Chairperson will continue to follow the migrant and refugee crisis and liaise with international officials and experts on policy developments.

Santos has completed several trips relating to the crisis, including to southern Italy with members of the Italian Delegation to the OSCE PA, and to Turkey’s border with Syria, alongside OSCE PA President Ilkka Kanerva.

She plans to share her observations and ideas for action when the leadership of the OSCE PA discusses the crisis at its Bureau Meeting in Belgrade on 2 December.

Parliamentarians from across the 57 participating States of the OSCE area are also expected to debate migration issues during the Assembly’s Winter Meeting in Vienna, to be held on 25-26 February 2016.