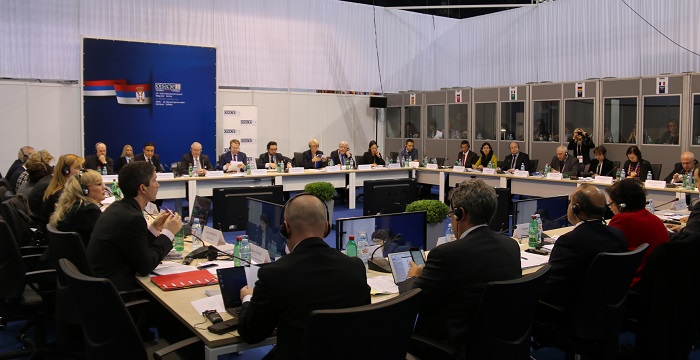 BELGRADE, 2 December 2015 – The elected leadership of the OSCE Parliamentary Assembly met today in Belgrade alongside OSCE Chairperson-in-Office and Serbian Foreign Minister Ivica Dacic for a discussion on the crisis of migrants and refugees and possibilities for strengthening the OSCE’s response.

Maja Gojkovic, the Speaker of the Serbian National Assembly, and Dijana Vukomanovic, the Head of Serbia’s Delegation to the OSCE PA, were also guests at the meeting, the final gathering of the PA Bureau this year.

The meeting was held on the eve of the OSCE Ministerial Council, during which foreign ministers from OSCE participating States will consider several declarations, including one on the Organization’s responses to the ongoing migrants crisis.

OSCE Parliamentary Assembly President Ilkka Kanerva (MP, Finland) chaired the discussion, during which parliamentarians discussed a range of aspects of the crisis, including the need for burden-sharing, how to address the root causes, the importance of differentiating between economic migrants and refugees, and the relationship between migration and security.

The meeting also considered suggestions submitted by Isabel Santos (MP, Portugal), the Chairperson of the Assembly’s Committee on Democracy, Human Rights and Humanitarian Questions, including the possibility of establishing an Organization-wide co-ordinating position on migration or a thematic field mission.

Parliamentarians from across the 57 participating States of the OSCE area are expected to debate migration issues during the Assembly’s Winter Meeting in Vienna, to be held on 25-56 February 2016.

The Bureau meeting also featured discussion of the Ukraine crisis and the Assembly’s election observation activities.

Tedo Japaridze, Acting Head of the Georgian Delegation to the Assembly, also briefed Bureau members on preparations for the 2016 OSCE PA Annual Session in Tbilisi, scheduled for 1-5 July.

Earlier on 2 December, President Kanerva held bilateral meetings with Chairperson Dacic, Speaker Gojkovic and OSCE Secretary General Lamberto Zannier. Topics included the situation in and around Ukraine and the migrants crisis. The President also visited the OSCE Mission to Serbia.

He will address foreign ministers gathered in Belgrade on 3 December.