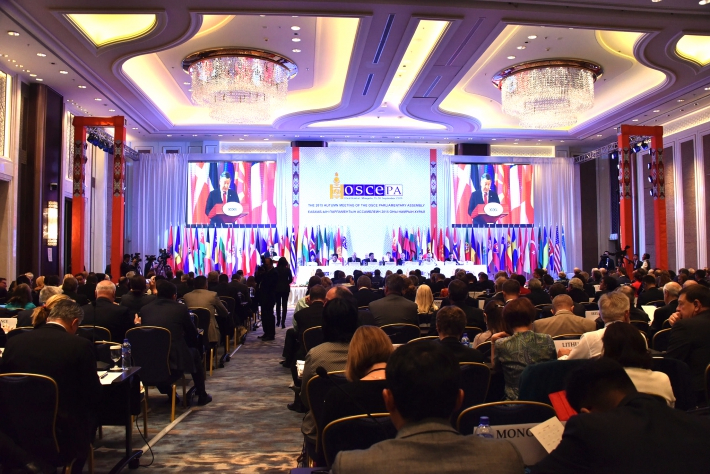 Dozens of parliamentarians, including from countries of arrival, transit and destination for refugees, addressed the scope and nature of the crisis; exchanged ideas on short- and long-term responses; and underscored the role of parliamentarians in generating the needed political will.

“We are now witnessing things that we never thought we would witness,” said Italian parliamentarian Marietta Tidei, the Rapporteur of the OSCE PA’s Committee on Economic Affairs, Science, Technology and Environment.

“People who are fleeing war are being fired on with tear gas… But it is not enough to express anger. We need a common political vision,” she said.

Tidei was among multiple parliamentarians who argued that the OSCE and its parliamentary branch, in bringing together representatives of 57 countries, are ideally placed to facilitate the sharing of best practices, to chart commonly agreed policies and to inspire action.

Batchimeg Migeddorj, the Head of Mongolia's Delegation to the OSCE PA, said:

“Although we are geographically far away, it is painful for us to see this human suffering every day. We understand that this is a complex issue, but the OSCE should send a clear message to the world on how we should deal with this crisis.”

Several parliamentarians noted that their connection with constituents would be crucial in generating public support for burden-sharing policies, guarding against xenophobia and educating people on the driving factors behind the refugee crisis.

Metin Baydar, the Acting Head of Turkey’s Delegation of the Assembly, projected the image of a drowned Syrian toddler onto a screen for parliamentarians to view. He was one of several lawmakers who underscored that the refugee crisis must be not be considered a European problem only.

“This should be seen as a joint responsibility of humanity… It is the international community working as a whole that will solve this problem,” he said.

Derek Keating, a Member of Ireland’s Delegation to the OSCE PA, said:

“This is not a crisis of borders, but a crisis of solidarity… That Syrian boy was silenced through death, and yet is speaking to the world. We must continue to listen to him.”

In his intervention, OSCE PA Vice-President Peter Bowness (MP, United Kingdom) said, "It is too easy to condemn countries for not responding as we might like them to in an ideal world.”

Countries dealing with an influx of refugees require increased administrative support,  Bowness said, while emphasizing that “the long-term element is promoting secure and peaceful environments in home countries so that people do not become refugees.”

Spanish parliamentarian Ignacio Sanchez Amor, the OSCE PA’s Special Representative on OSCE Border Issues, stressed that one immediate way for the OSCE to assist countries in dealing with the crisis is to make its Border Management Staff College in Dushanbe more available to all participating States.

The final session of the 2015 Autumn Meeting also featured a presentation by Bold Luvsanvandan, a Member of the Mongolian Delegation to the OSCE PA, on his country’s human rights record.

Hosted by the State Great Hural (Parliament) of Mongolia, the Autumn Meeting has brought together nearly 200 MPs to consider continuing and emerging security concerns for the OSCE area and the role of parliamentarians in fostering needed co-operation.

For news, video, photos and speeches from the Meeting visit: http://www.oscepa.org/meetings/autumn-meetings/2015-mongolia