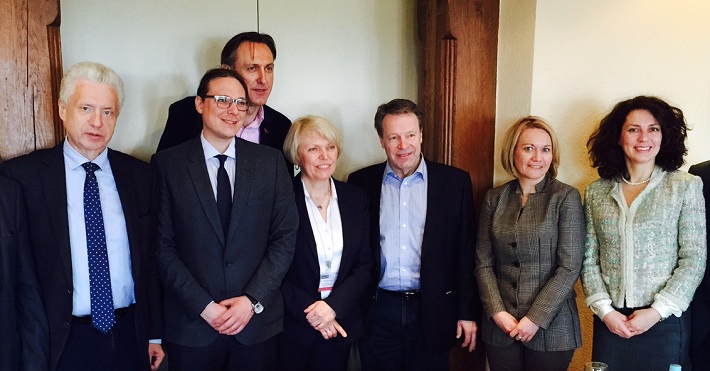 "A few weeks before the 70th anniversary of the end of World War II and in this 40th anniversary year of the Helsinki Final Act, we need to draw lessons from examples of reconciliation and post-conflict rehabilitation between neighbors," said OSCE PA President Ilkka Kanerva (MP, Finland).

"Despite the differences between the conflicts, the German-French example shows that conflicts can be resolved when there is political will and incentives to do so. I hope that my Russian and Ukrainian parliamentary colleagues can take lessons learned from history, and from this seminar, back to their capitals and be inspired to work hard for peace," Kanerva added.

The seminar was addressed by history experts and officials including the former Prime Minister of the state of Rheinland-Pfalz, Kurt Beck; the Head of the Taskforce for the 2016 German OSCE Chairmanship, Ambassador Antje Leendertse; County Chief Executive Theresia Riedmaier; and the Director of the OSCE Office for Democratic Institutions and Human Rights (ODIHR), former German Foreign Office State Minister Michael Georg Link.

On behalf of German Foreign Minister Frank-Walter Steinmeier, Ambassador Leendertse welcomed the efforts undertaken by the OSCE PA, which she described as a parliamentary parallel to the meetings of governments in the so-called "Normandy format" on the conflict in and around Ukraine.

"In any conflict, both sides will be losers," said former PA President and President of the Parliament of Montenegro Ranko Krivokapic.

"In the present conflict in and around Ukraine, it is a particular tragedy that – in contrast to the historical German-French conflict – the peoples of Ukraine and Russia have been living peacefully side by side," he added.

The history experts noted that the German-French example demonstrates the strong desire of citizens affected by conflicts to preserve their cultural identity, their economic livelihoods and their personal freedoms, and that viewing conflicts primarily through military strategy has always led to crisis and even catastrophe.

OSCE PA Vice-President Doris Barnett of Germany, who hosted the seminar, and fellow OSCE PA Vice-President Alain Neri of France concluded, "This is why we should not focus on the history of the conflict only, but rather, on possibilities for reconciliation and co-operation in the interest of all affected human beings."

The participants, including the members of the Russian and Ukrainian Delegations to the OSCE PA, welcomed the opportunity for an exchange of views on issues vital to the people affected by the current crisis and agreed to continue talks in support of full compliance with the Minsk Agreements and to help facilitate the resolution of the crisis in and around Ukraine.

All participants insisted that local elections in the eastern part of Ukraine, as called for in the Minsk Agreements, must be held in line with OSCE commitments and monitored by election observers, with security guarantees for those observers.

Participants also discussed the need to observe developments along the Russian-Ukrainian border in order to receive as much objective information as possible.

The Leinsweiler retreat and seminar is part of the "Vienna Process," which then-OSCE PA President Krivokapic launched in April 2014, following a proposal by Vice-President Barnett. At the 2014 OSCE PA Annual Session in July, OSCE PA President Kanerva also began work on the formation of a high-level Interparliamentary Liaison Group on Ukraine, which aims to contribute to confidence-building and conflict resolution.

"The Vienna Process aims to the create space for inter-parliamentary dialogue in an intimate setting. Such opportunities are badly needed for any attempt to address the current conflict in and around Ukraine and to achieve what is needed most – namely, to stop human suffering," said Vice-President Barnett.

Participants generally welcomed a suggestion by German OSCE parliamentarian Franz Thonnes, the Deputy Chair of the Bundestag's Committee on Foreign Affairs, to have a follow-up meeting take place in the north of Germany with a focus on the protection of national minorities, looking at the German-Danish example.

OSCE PA participants in the retreat and seminar included: