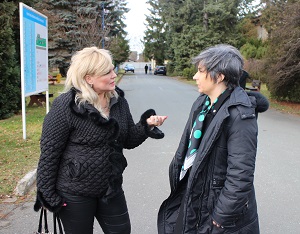 Committee Chairperson Isabel Santos (right) and Vice-Chairperson Ivana Dobesova speak outside of the residential center for asylum-seekers in Kostelec nad Orlici, Czech Republic, 2 February 2016. PRAGUE, 3 February 2016 – The leadership of the OSCE Parliamentary Assembly’s Committee on Democracy, Human Rights and Humanitarian Questions visited the Czech Republic on 1 and 2 February to consider the country’s role in responding to the crisis of migrants and refugees currently affecting the OSCE area.

The delegation, led by Committee Chairperson Isabel Santos (MP, Portugal), visited a residential center for asylum-seekers in Kostelec nad Orlici, some 150 kilometers east of Prague. The delegation met with officials from the Interior Ministry’s Department of Asylum and Migration Policy; parliamentarians from the Committee on European Affairs and the Sub-Committee on Migration and Asylum Policy; representatives of the Prague 13 municipal district; the leadership of the Prague Integration Center; and representatives of several NGOs.

“I welcome the opportunity to learn about how Czech officials and civil society view the crisis of migrants and refugees and how they approach it in practical terms. I take note of improvements the Czech Republic is pursuing in domestic policy and funding. The stated commitment to EU resettlement policy and UN relocation initiatives that we heard in our meetings is an important signal,” Santos said.

“However, I appeal to Czech politicians to pursue a public discourse that is less driven by fear of ‘the other.’ This type of rhetoric has dangerous effects on all societies and is an approach that too many leaders across Europe are using today to avoid addressing the real problem. Leaders must always remind themselves, and help the public understand, who refugees really are – acutely desperate people who are fleeing war zones in search of basic human dignity,” the Chairperson said.

“The Czech Republic’s work to manage the situation of migrants and refugees is of course part of a much larger response to the challenge that Europe is facing. Collective work on a Europe-wide level is truly the key. A more comprehensive, better functioning approach on that level, including stronger identification procedures for people entering Europe, will assist my country and many other countries in our domestic work,” Dobesova said.

“The OSCE can also do more in partnership with the European Union and other international bodies to support practical solutions. Openness to learning about, and learning from, each country’s experiences in this context is also crucial for progress. The OSCE Parliamentary Assembly can be an important forum for that,” the Vice-Chair added.

While in Prague, the delegation also visited the headquarters of Radio Free Europe/Radio Liberty for a roundtable discussion with journalists on human rights and media freedom issues.

The delegation will travel to Serbia on 3-4 February to visit refugee facilities in the south of the country and to observe the situation at a crossing on the border with the former Yugoslav Republic of Macedonia.

The crisis of migrants and refugees in the OSCE area and efforts to find collective solutions will be the central topic of the Parliamentary Assembly’s upcoming Winter Meeting, scheduled for 25-26 February in Vienna.