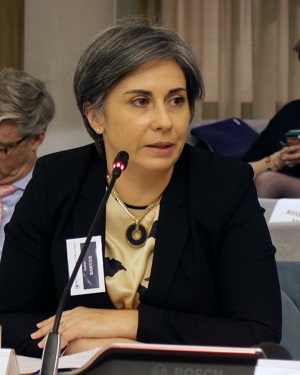 On 4 March, Chairperson Santos joined senior government officials and representatives of a range of international organizations at the OSCE’s Security Days event on theme “Refocusing Migration and Security: Bridging National and Regional Responses.”

On 3 March, Secretary General Montella joined parliamentarians and senior government officials as a guest speaker at the Italian Senate for a debate on “Migration and Security: a Difficult Balance.”

“The real crisis here is not one of security, for it is both cynical and false to assume that these refugees will bring into Europe the kind of violence that made them flee their homes in the first place. Instead, the crisis here is the lack of solidarity, the lack of political will, and, in some cases, racism – all of which are hampering international efforts to adequately deal with this situation,” Santos said.

“If reasonable security considerations are hijacked by the rhetoric and politics of fear, we only distance ourselves from the collective response needed, based on mutually agreed commitments, redoubled efforts, human rights and human dignity,” the Chairperson added.

Speaking at the OSCE Security Days event, Santos introduced her Committee’s special report on the migration crisis, which was released last week during the Parliamentary Assembly’s Winter Meeting.

The report offers concrete recommendations and suggested priorities for an improved response to the crisis by the OSCE and its participating States.

In her remarks, the Chairperson also emphasized the need for better co-operation between the OSCE, the European Union and the United Nations to deal with the crisis; called for the establishment of more multi-service centers in countries of origin to promote legal channels of migration; and advocated for better equipping hotspots to provide information to migrants about their rights and next steps.

Santos also encouraged the establishment of an OSCE mission or special co-ordinating position on migration to strengthen the Organization’s efforts on migration-related activities ranging from training border police to combating human trafficking to advising countries on policy decisions.

The Vice-Chairperson of the Assembly’s Committee on Democracy, Human Rights and Humanitarian Questions, Ivana Dobesova (MP, Czech Republic), members of Italy’s Delegation to the OSCE PA, and Secretary General Montella were also present for the event.

During the Senate debate on 3 March, Montella spoke alongside Italian Under Secretary for Foreign Affairs Vincenzo Amendola, the Head of Italy’s Delegation to the OSCE PA, Paolo Romani, and OSCE Secretary General Lamberto Zannier.

In his intervention, the Secretary General described the OSCE PA’s activities related to the crisis of migrants and refugees, including its special report, and emphasized the need to find synergies between international actors to mitigate the situation.

Montella met earlier with the President of the Italian Senate, Pietro Grasso, alongside OSCE Secretary General Zannier. He presented the Assembly’s recent activities and priorities during a wide-ranging discussion. The sides also explored the possibility of Italy's hosting an OSCE PA event in the future.

The Secretary General held additional meetings in Rome with officials from the Ministry of Foreign Affairs.