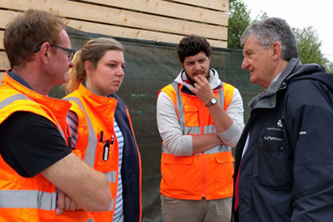 OSCE PA Vice-President Alain Neri meets the staff of “La vie active” NGO in Calais, 11 May 2016.CALAIS, 11 May 2016 – The refugee and migrant crisis is impacting all of Europe with implications in humanitarian, economic and security dimensions, and therefore requires a continent-wide, multidimensional response, said parliamentarians at the conclusion of a field visit to Calais today.

Visiting the encampment commonly known as “the jungle” and nearby reception centers on the outskirts of Calais, France, members of the OSCE Parliamentary Assembly’s Ad Hoc Committee on Migration spoke today with refugees and migrants – many of whom hope to reach the United Kingdom by attempting to cross the English Channel – to hear their stories and see first-hand their living conditions.

The visit also included a briefing Tuesday in the French Interior Ministry on the migrant situation in the Calais region, and working meetings in Calais with various government officials and non-governmental organizations. Following a field visit to the temporary reception centres in the Calais camp including facilities for women and children, the delegation visited another camp near Dunkirk set up by the local mayor and Doctors Without Borders (MSF).

“Some call this encampment ‘the jungle,’ but the real jungle is the jumbled and sometimes conflicting interests and policy responses coming from European capitals. To effectively deal with this crisis, we need more equitable responsibility-sharing and better integration measures to ensure that migrants can contribute to society,” said Ad Hoc Committee on Migration Chair Filippo Lombardi (MP, Switzerland).

OSCE PA Vice-President Alain Neri (MP, France), who hosted the delegation of seven parliamentarians, added that conflict resolution and economic development in countries of origin must be considered part of the overall European response to the migration crisis.

“While the Calais migrant encampment is not a new phenomenon for France, it has taken on a greater urgency as the migration crisis has escalated in the past two years. Seeing first-hand the conditions in which many migrants live gives an indication of the severe difficulties that many thousands of migrants face on a daily basis. While we must work to improve the situation for refugees forced to flee their homes and live in these camps, we must also redouble our efforts to bring peace and prosperity to countries of origin,” Neri said.

“In Calais, we saw that the State can and must intervene to improve the conditions in the camps, in co-operation with local associations and NGOs,” he added.

After seeing the camps, committee members stressed the need for European countries and international organizations to work in co-operation to respond in a coherent, equitable and humane way to this challenge, including through burden-sharing and increased funding for those countries most affected. The parliamentarians applauded the work of aid workers to provide decent living conditions to migrants and refugees in the encampments.

Members of the Committee pledged to continue their efforts through the OSCE Parliamentary Assembly to find practical policy solutions to the complex problem. They noted that the OSCE, with its 57 participating States, remains a useful and appropriate body for consideration of migration challenges due to its comprehensive approach to security including political and security questions; economic issues; and human rights and humanitarian questions.

In addition to Neri and Lombardi, members of the parliamentary delegation to Calais included OSCE parliamentarians from Czech Republic, Italy, Spain, Sweden, and Turkey, including leaders of the OSCE PA’s general committees on humanitarian and security affairs. Lord Alfred Dubs, a member of the British OSCE PA delegation who has recently led a campaign in the United Kingdom to pressure his government to accept more unaccompanied children from camps in Europe as refugees, plans to also visit the Calais region in the near future.

The OSCE PA’s Ad Hoc Committee on Migration was established following a unanimous decision taken by the Standing Committee at the OSCE PA’s Winter Meeting on 25 February 2016 in Vienna. It serves as a focal point for the OSCE PA’s work in the field of migration in all three dimensions of the OSCE: political and security questions; economic issues; and human rights and humanitarian questions. The Calais field visit is the first official activity of the Ad Hoc Committee, whose future plans include visits to Turkey, Greece and Lampedusa, Italy.

Senior OSCE PA officials have previously engaged with the topic of migration and refugees through field visits including in Turkey and Italy, and have held several high-level debates on the topic.

For more information on the Ad Hoc Committee on Migration, including its full membership and mandate, please click here.