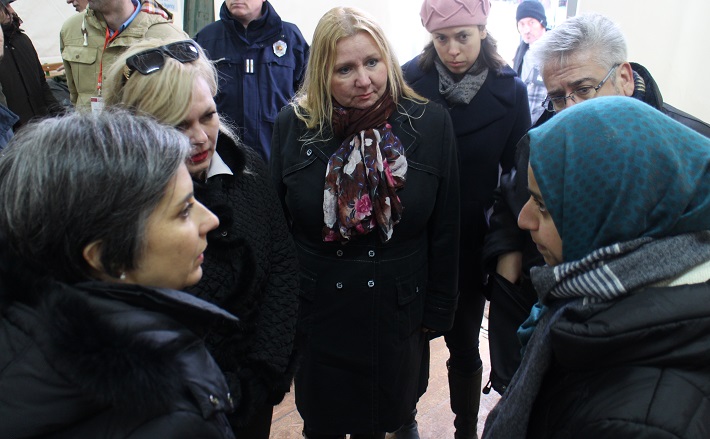 BELGRADE, 5 February 2016 – The leadership of the OSCE Parliamentary Assembly’s Committee on Democracy, Human Rights and Humanitarian Questions traveled to southern Serbia on 4 February, meeting with refugees, aid workers and officials at reception facilities near the border with the former Yugoslav Republic of Macedonia.

The delegation, led by Committee Chairperson Isabel Santos (MP, Portugal), visited the reception facilities at Miratovac and the registration center at Presevo, which serve thousands of transiting people daily.

Members heard the personal stories of Syrian refugees and discussed procedures and trends related to the crisis with workers from a range of international organizations and aid groups, including the UN Refugee Agency (UNHCR), the International Organization for Migration and the Red Cross.

“There is sadness and there is hope in the air and on the faces here, and indeed, the crisis of migrants and refugees is about both. Serbian citizens and authorities have done admirable work in many respects, including in their humanitarian approach, the implementation of biometric registration and better equipped facilities. The country must continue on this positive path and ensure that good practices on paper are fully translated into reality,” Chairperson Santos said.

“But Serbia, like many other countries, needs to be part of a co-ordinated Europe-wide response. That response must be based on real burden-sharing, the removal of fences and walls, legal channels for migration and an efficient, common registration procedure in the countries dealing with this flow of human beings,” she said.

The OSCE can also do more to help manage the crisis, the Chairperson noted, including through facilitating the exchange of best practices, organizing additional trainings for officials dealing with migrants and refugees, providing expanded legislative assistance, and monitoring and reporting.

The delegation was joined on 4 February by the Head of Serbia’s Delegation to the OSCE PA, Dijana Vukomanovic, delegation member Meho Omerovic, who serves as Chairperson of the Serbian Parliament’s Committee on Human and Minority Rights and Gender Equality, and OSCE PA Secretary General Roberto Montella.

“After the wars in the 1990s, the concept of a ‘refugee crisis’ and the understanding that anyone can become a refugee is not new to Serbia. That experience tells me that the current situation affecting Europe is certainly manageable, particularly once we put better domestic and international mechanisms in place.

“But what is most disturbing to me at the moment is not simply the lack of solidarity among countries, but the deeper sense that these people are just not wanted in Europe. And so, as we shape policies, we must do soul-searching along the way – and break down not just the new walls along borders, but the walls between human beings.”

The delegation’s visit to the border area followed a day of consultations in Belgrade on 3 February. Members met with Serbian parliamentarians; Ambassador Peter Burkhard of the OSCE Mission to Serbia; officials from Serbia’s Commissariat for Refugees and Migration; UNHCR Serbian Representative Hans Schodder; and experts from the Belgrade Center for Human Rights.

The delegation also met with officials at the OSCE's southern Serbia field presence in Bujanovac.

The crisis of migrants and refugees in the OSCE area and efforts to find collective solutions will be the central topic of the Parliamentary Assembly’s upcoming Winter Meeting, scheduled for 25-26 February in Vienna.

The Assembly’s Committee on Democracy, Human Rights and Humanitarian Questions will present a report on the topic, which will include concrete proposals for action by participating States and the OSCE.