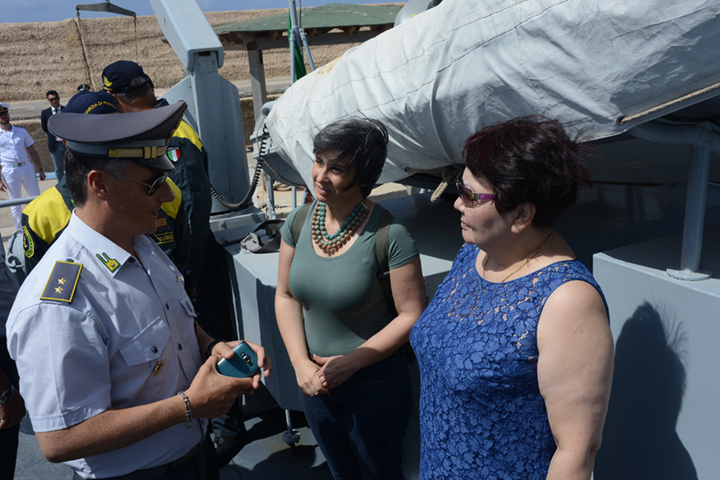 Isabel Santos (centre) and Madina Jarbussynova (right) are briefed by an interlocutor from Guardia di Finanza in Lampedusa, 20 June 2016LAMPEDUSA, 20 June 2016 – On the occasion of World Refugee Day, OSCE parliamentarians called on countries across the OSCE region to more equitably share responsibilities towards refugees and migrants, as well as to improve integration measures to ensure that they can contribute to society.

Highlighting the need for more cohesive policy responses, Swiss parliamentarian Filippo Lombardi, who chairs the OSCE PA’s Ad Hoc Committee on Migration, noted that the lack of a unified response is indicative of a leadership problem in the region.

“The refugee and migrant crisis is many things,” Lombardi said. “It’s a humanitarian and human rights crisis and an ongoing tragedy, as well as a political challenge with economic and security implications. But it is also a crisis of leadership and solidarity. To address the challenges of refugees and migrants fairly and humanely, all countries need to recognize their own role and responsibility.”

In Lampedusa, Santos and Jarbussynova have met with migrants and refugees, officials at the Coast Guard Maritime District Office and European Asylum Support Office, representatives of the United Nations High Commissioner for Refugees, International Organization for Migration, FRONTEX and non-governmental organizations, as well as Lampedusa Mayor Giusi Nicolini. Following these meetings, Santos commended the work being done on the ground but reiterated that much more must be done to address the crisis.

“Returning to Lampedusa on World Refugee Day, one year after my last visit, I regret that the crisis has only worsened,” Santos said. “While Lampedusa has long been a reception point for migrants, the growing nature of the global crisis has pushed this small island’s ability to deal with the influx beyond what should be expected. The lack of burden-sharing and European solidarity on this issue has led to a situation that is intolerable both for migrants and for the countries hosting them.”

Santos noted that, so far this year, more than 2,000 migrants have perished in the Mediterranean, with over 700 drowning in one week alone in May. Thousands more have been rescued thanks to the efforts of the Italian Coast Guard. She added that European countries need to demonstrate more support for refugees and migrants.

“I call on all countries to accelerate procedures for processing of asylum cases. I also appeal to European leaders to display more courage, putting aside the xenophobia and self-interest that has characterized so much discourse, and publicly recognize the strength that migrants bring to our societies,” Santos said.

Ambassador Jarbussynova, who is focusing on the illicit human trafficking and smuggling that takes place in the context of the global migration crisis, said today that combating trafficking in human beings is one of the most important aspects of promoting a comprehensive and humane response to the crisis of migrants and refugees.

“On this day we are reminded of the need to assist the millions of refugees who have undertaken such difficult journeys,” said Jarbussynova. “They face many risks, including the danger that they will become human trafficking victims.”

The subject of refugees and migrants is expected to feature prominently at the OSCE PA’s 25th Annual Session taking place in Tbilisi, Georgia, from 1 to 5 July, with several resolutions dealing with the crisis expected to be addressed.