VIENNA, 26 February 2016 – Lawmakers from across the 57-country OSCE area gathered today at the concluding session of the OSCE Parliamentary Assembly’s 2016 Winter Meeting for a wide-ranging special debate on the crisis of migrants and refugees and ways to strengthen the collective response.

The debate, featuring interventions by dozens of parliamentarians, including from countries of arrival, transit and destination, also featured a keynote address by Christos Stylianides, the European Commissioner for Humanitarian Aid and Crisis Management and former Head of the Delegation of Cyprus to the OSCE PA.

A special report on the crisis of migrants and refugees, containing concrete proposals for action by the OSCE and its participating States, was released in parallel to the debate.

“A comprehensive, effective and sustainable solution to the crisis will only come from collective brainstorming, collective will, and collective action. The OSCE can and must do more,” said OSCE PA President Ilkka Kanerva (MP, Finland) in his opening remarks. 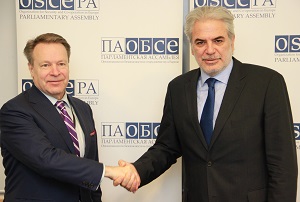 “Some of our constituents are afraid of how this will affect their countries, their communities, and themselves, in terms of security, social cohesion, economics and more. Meanwhile, walls on our territories and in our minds are going up and people are continuing to die. As the tragedies continue in Syria, Iraq and elsewhere, the issue before us is not going to simply go away on its own,” the President said.

In his address, Commissioner Stylianides underscored the unprecedented nature of the crisis facing Europe, the questions it has raised for European solidarity, and collective responsibility:

“It is not an exaggeration to say that this crisis is testing our unity, our principle of diversity, [and] our principles of tolerance and openness. It even tests our determination to safeguard the vision of the founding fathers for a united Europe.

“The responsibility is enormous for all of us. No single country or actor can respond to the scale and complexities of our challenges. We need to work all together. This is the only choice we have. And it is the choice we have already made. We have to respect it,” he said.

Parliamentarians from Greece to Canada, France to Slovenia, Italy to Serbia and the United Kingdom to OSCE Partner State Algeria all participated in the debate.

Among the issues discussed were: burden-sharing; the root causes of the crisis; the dangers of a fragmented approach; EU policy strengths and shortcomings; the implementation of quotas; funding to origin and arrival countries; the social and economic integration of migrants; public opinion on the crisis; the importance of close engagement with the OSCE’s Mediterranean Partner States; the status of the Dublin Regulation; issues of criminality and human trafficking associated with the crisis; and the human rights of migrants and refugees.

Parliamentarians also discussed several of the proposals contained in the newly-released special report on the crisis, which was prepared by the leadership of the OSCE PA’s Committee on Democracy, Human Rights and Humanitarian Questions.

“There has been a worrying trend to scapegoat refugees, close borders and react with fear. The unjustified linking of refugees with terrorism is of grave concern. The increasing reluctance to protect those fleeing violence is of grave concern. And the suspicions these people are met with when all they want to do is seek shelter from war should be of grave concern to all of us,” said Committee Chairperson Isabel Santos (MP, Portugal), who presented the report.

Among the report’s recommendations for the OSCE are: to create a high-level co-ordinating position to strengthen the Organization’s work on migration and refugees; to establish a thematic field mission on migration; to enhance co-operation with the OSCE’s Mediterranean Partners; and to increase parliamentary-level exchanges of best practices.

The report also contains numerous recommendations for OSCE participating States and/or EU member countries, including: to provide increased financial and political aid to countries bordering Syria; to develop measures for a better functioning resettlement mechanism; to reconsider the practice of selective admittance applied to migrants on the South Balkans route; to better operationalize the hotspots concept; and many more.

In closing the debate, President Kanerva noted that events later on 26 February could have a significant effect on the topic of discussion:

“Let me express my deepest hope for something that we should see in the next few hours: That is, the effective entry into force of the ceasefire in Syria tonight. As we have discussed today, the nightmare in Syria and the tremendous human suffering it has caused is at the root of the migration crisis that we are witnessing now – not to mention its dangerous geopolitical effects. And so I strongly appeal to all stakeholders, several of whom are represented here by members of the PA, to do their utmost to support this ceasefire.”

The closing day of the 2016 Winter Meeting also included a meeting of the Committee on Political Affairs and Security, which focused on efforts to combat terrorism, and presentations by OSCE Secretary General Lamberto Zannier and the Assembly’s Special Representative on Gender Issues, Hedy Fry (MP, Canada).

Access videos, photos, reports and all other documents from the Meeting here.