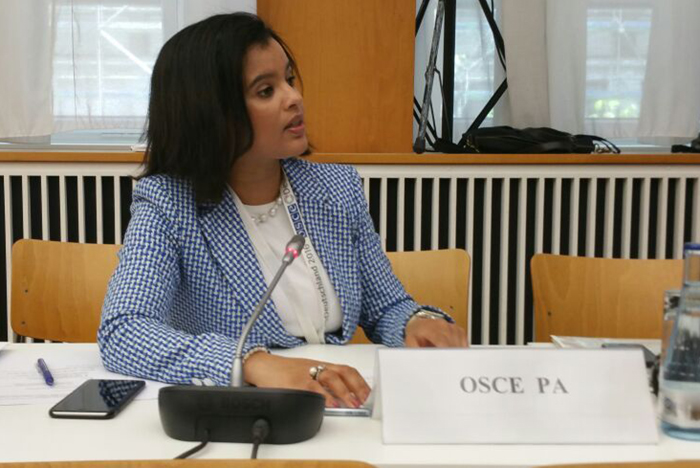 “While many governments see migration as a burden that must be shared more equitably, there are also numerous advantages to be gained from immigrants, who often bring needed skills and help spur economic growth,” Sena pointed out.

“People leaving their homes in search of safety, freedom and economic security are teachers, health care workers, scientists, engineers, and construction workers – the very people we need to revitalize stagnant economies by fueling population growth and sustaining critical industries such as agriculture and manufacturing,” she added.

Speaking at a session this afternoon with a focus on migrants’ contributions to economic development, stability and security, Sena took the opportunity to highlight the OSCE PA’s recent work on the issue of migrants and refugees, noting in particular the recent launching of an Ad Hoc Committee on Migration, chaired by Swiss parliamentarian Filippo Lombardi. She mentioned in particular last week’s visit by members of the committee to the migrant encampments in the vicinity of Calais, France.

“The visit to what is commonly called ‘the jungle’ served as a stark reminder of the human effects that the current approach to migration management is having on people fleeing conflicts, political repression and poverty,” Sena said. “This approach has been characterized by a lack of European solidarity and by governments viewing the issue through the prism of short-sighted national interests.”

The OSCE should assist participating States by promoting effective migration management, she said, including through the exchange of best practices, as well as by facilitating legal migration. She noted that the Parliamentary Assembly stands ready to work with the governmental side in developing this co-operative approach.

Organized by the German OSCE Chairmanship and the Office of the Co-ordinator of OSCE Economic and Environmental Activities, the Second Preparatory Meeting is taking place 19-20 May in Berlin under the theme “Strengthening stability and security through co-operation on good governance.” The Concluding Meeting is scheduled for 14-16 September 2016 in Prague.