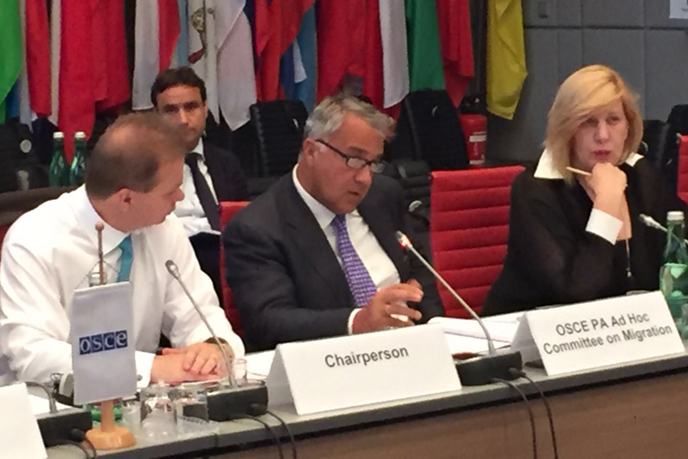 L-R: Claude Wild, Makis Voridis, Dunja Mijatovic, with Roberto Montella in the background. Vienna, 27 June 2016VIENNA, 27 June 2016 – Improving international co-operation in response to the refugee and migrant crisis was emphasized by a number of OSCE parliamentarians at a meeting of the OSCE’s Informal Working Group Focusing on the Issue of Migration and Refugee Flows today in Vienna.

Addressing the working group, which was established earlier this year to better define the OSCE’s medium-term policy on migration and to propose an effective approach for the organization, members of the OSCE Parliamentary Assembly’s Ad Hoc Committee on Migration described the recent activities of the PA on the migration issue, including recent visits to Calais, France, and Lampedusa, Italy. Members called for greater attention to the humanitarian impacts of the crisis, in particular, as well as to its root causes.

In addition to the PA, other speakers today included OSCE Representative on Freedom of the Media Dunja Mijatovic and Maaike van Adrichem, adviser on gender issues in the office of the OSCE Secretary General. OSCE PA Secretary General Roberto Montella was also present at the working group, and met with PA members for discussions on the Assembly’s migration-related work.

The PA’s contribution to the working group session, chaired by Swiss Ambassador Claude Wild, was well received, with some national delegations to the OSCE expressing appreciation for the involvement and the contribution of the PA in advancing a comprehensive response of the OSCE to the migration crisis. The PA’s position within the OSCE as a prime and effective contributor to awareness-raising was also recognized.

Greek parliamentarian Makis Voridis, who serves as Vice-Chair of the OSCE PA’s Ad Hoc Committee on Migration, stressed in his remarks to the working group the importance of prioritizing the protection of women and children, as well as tackling other humanitarian concerns. “We must work together as national responses are not sufficient in addressing what essentially is a grave humanitarian issue,” Voridis said.

Ad Hoc Committee Vice-Chair Guglielmo Picchi (MP, Italy) noted the importance of addressing the underlying issues fueling the migration crisis. “It is of utmost and crucial importance to distinguish between refugees and other groups of migrants, in particular economic migrants, in order to effectively address the root causes of displacement,” Picchi said.

Head of the OSCE PA’s Norwegian Delegation Geir Joergen Bekkevold, who also serves on the Ad Hoc Committee on Migration, said that “it is vital that Europe does not forget its post-WWII recent past and that it stands up to protect vulnerable groups while implementing a more effective burden sharing among EU Member States.”

Italian parliamentarian Marietta Tidei, who serves both as a member of the Ad Hoc Committee on Migration and as Rapporteur of the OSCE PA’s General Committee on Economic Affairs, Science, Technology and Environment, noted the need for the media to enhance its coverage of the crisis in a more balanced and constructive way.

“The media plays a crucial role in shaping public opinion on migration-related issues and therefore on forging public acceptance of migration patterns,” she said. “The media, as an influential stakeholder, should place more emphasis on the positive aspects of migration.”

Today’s meeting of the informal working group marked the seventh time it has met since it was created as a result of the OSCE Security Days event in Rome on 4 March 2016, and the first time that members of the OSCE PA have addressed the body. The working group has been tasked by the 2016 OSCE German Chairmanship with analyzing existing OSCE tools in addressing the migration challenge, identifying viable entry points for the OSCE and providing recommendations on the way forward. The PA’s contribution to the working group session today will be included in the findings to be presented at a special meeting of OSCE ambassadors on 20 July.

The refugee and migration crisis is expected to feature prominently at the OSCE PA’s 25th Annual Session, beginning this Friday in Tbilisi, Georgia.