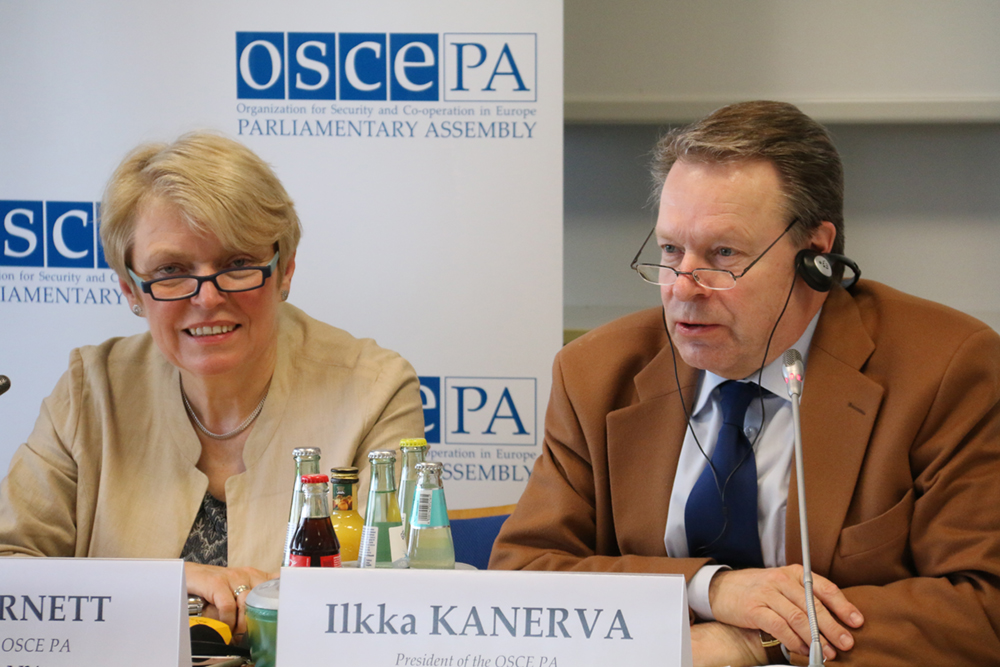 OSCE PA Treasurer Doris Barnett and President Ilkka Kanerva at the Leinsweiler seminar, 16 April 2016LEINSWEILER, 17 April 2016 – Members of Parliament from 15 countries gathered in the French-German border region on 16 and 17 April to consider parliamentary contributions to OSCE efforts in addressing conflicts. Some 25 parliamentarians, including from several countries impacted by protracted conflicts, heard presentations from experts on reconciliation processes particularly in the Saar-Lor-Lux and Tyrol-South Tyrol-Trentino regions.

“Over the last month, dramatic developments in Ukraine and in the Nagorno-Karabakh conflict zone, have once again demonstrated the destabilizing potential and human cost of conflict. Finding political will to overcome differences remains critical to finding solutions to all conflicts in the OSCE region, so Members of Parliament are an essential component of any solution for conflicts that the OSCE is mandated to deal with,” said President Kanerva.

The seminar was also intended to provide parliamentarians from countries impacted by protracted conflicts with new ideas for conflict resolution and to gather their proposals, as a contribution to official conflict resolution discussions. The discussions took on an added urgency due to the recent significant military escalation in the Nagorno-Karabakh conflict zone.

“Our surroundings, in a region long fought-over between France and Germany, but now peaceful and productive, are evidence that painful conflicts can be solved to the benefit of the conflicting sides. We take inspiration from these experiences, and will continue to contribute at a parliamentary level to OSCE efforts to resolve protracted conflicts,” continued the President.

Participants were encouraged to consider real-life consequences, not just the politics of conflicts and overall to “think the unthinkable.” Aspects related to minorities and human rights were in focus on the second day of the seminar.

“Talking about the past is critical to learning lessons, but it is not enough. This has therefore been an excellent opportunity to reflect on the common future that can result from reconciliation,” said Doris Barnett, who hosted the event on behalf of the German Parliament.

As representatives of those suffering from conflict, participants highlighted the particular abilities of OSCE PA members to contribute at a parliamentary level to formal resolution processes.

The seminar in Leinsweiler, Germany, follows a previous event in March 2015 dedicated to exchanging experiences from the Franco-German border regions with parliamentarians from Russia and Ukraine.

Photos from the event are available here.