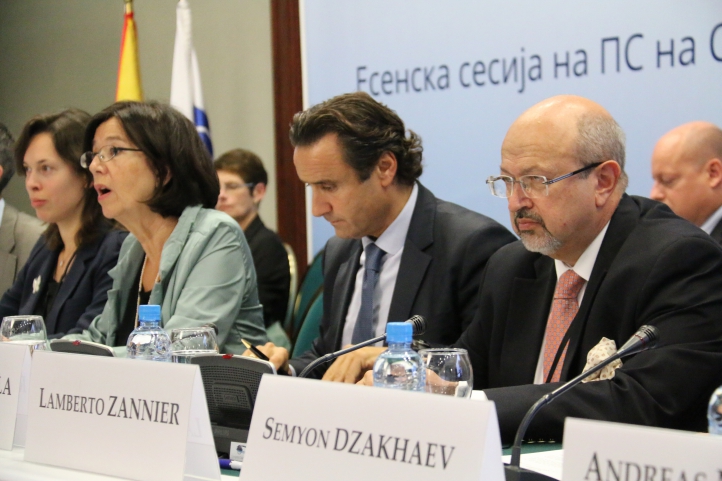 SKOPJE, 2 October 2016 – The refugee and migrant crisis and the potential of the OSCE and its parliamentarians to help mitigate the situation were the focus of debate today during the final session of the OSCE Parliamentary Assembly’s Autumn Meeting.

Under the theme of “Improving Human Rights-Based Governance of International Migration,” dozens of parliamentarians exchanged ideas on political responses and underlined their role in building public support for co-ordinated answers to the migrant and refugee crisis.

“We should stop thinking of the migration crisis as a burden that must be shared, and instead embrace joint responsibility,” said Swiss parliamentarian Filippo Lombardi, the Chair of the OSCE PA’s Ad Hoc Committee on Migration. “We have a responsibility to promote the security and the respect of human rights of people in their home countries, and all along the migration path of those who have been forced to leave. As hosts, we must also prevent radicalization of any kind by offering every community the possibility to live freely and peacefully.”

Lombardi was among multiple parliamentarians who argued that the OSCE is ideally placed to generate co-ordinated policies to manage the refugee and migrant crisis. They were joined by Minister of Internal Affairs Oliver Spasovski, who offered insights on how his country has handled the crisis.

“The issue of migration cannot be dealt with in isolation; raising walls do not solve the problem,” said Spasovski. “Last year’s events show that the absence of a co-ordinated approach, both at the operational and legislative level, is to the detriment of the countries concerned and the unfortunate people forced to migrate. I am deeply convinced that in that context the OSCE has an extremely important role to play.”

The topic of good governance was addressed throughout the parliamentary conference. On Friday 30 September, the parliamentary conference debated “Good governance as a basis for fostering economic development in the OSCE region” and heard presentations from Halil Yurdakul Yigitguden, the OSCE Economic and Environmental Co-ordinator, and Vladimir Gligorov from the Vienna Institute for International Economic Studies.

“Economic development should be seen as part of the overall response to the challenges that we face today, including migration, as all of our countries will become more stable and secure by promoting economic development,” said OSCE PA Vice-President Azay Guliyev (MP, Azerbaijan). “None of us here can truly claim that we have met all of the highest standards of governance. Whether big or small, whether developed or still developing, all of our countries have room for improvement and can learn something from the best practices of other countries.”

Yesterday featured a roundtable discussion on “Developing democratic institutions and human rights in South East Europe: the role of the OSCE” with Foreign Minister Nikola Poposki and heads and representatives of OSCE field operations in the region.

“In developing and promoting democracy and human rights, we should be very clear that this is a continuous process where challenges keep on reemerging. We must remain persistent on this path,” said Foreign Minister Poposki. “It is without doubt that all the OSCE participating states, including our South East European region, should use the benefit of the agreed OSCE instruments, best practices and recommendations in developing democratic institutions and human rights as core values of our societies. We see a lot of merits in this endeavor.”

OSCE PA Vice-President Roberto Battelli (MP, Slovenia), the Special Representative on South East Europe, offered comments on the progress achieved by the Western Balkans over the past two decades:

“Unlike other regions of the OSCE, the perspective of EU integration was, at least in the aftermath of the brutal and numerous conflicts which affected the region, vividly supported both east and west of Vienna,” said Battelli. “This is, in my view, a brilliant expression of collective responsibility within the OSCE – somehow a “golden standard” for international diplomacy which we must struggle to preserve.”

The Autumn Meeting brought together nearly 170 MPs to consider continuing and emerging security concerns for the OSCE area and the role of parliamentarians in fostering needed co-operation.

Speeches, video, photos and more from the Autumn Meeting are available on: http://www.oscepa.org/meetings/autumn-meetings/2016-skopje