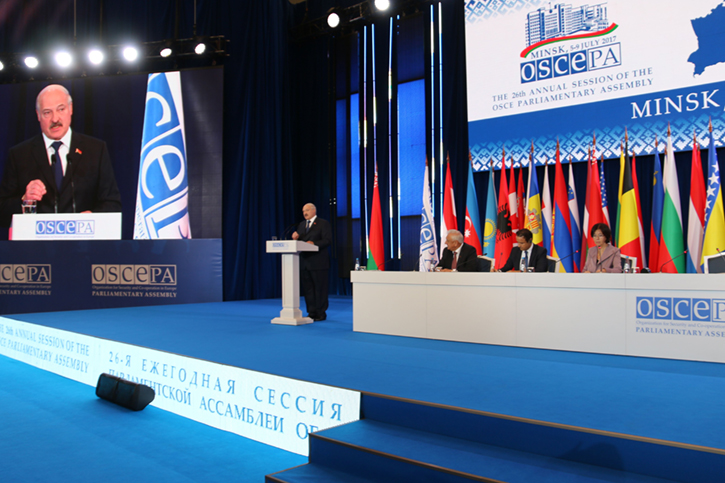 Belarusian President Aleksandr Lukashenko, Chairman of the House of Representatives of the National Assembly of the Republic of Belarus Vladimir Andreichenko, OSCE Parliamentary Assembly President Christine Muttonen, and the OSCE Chairperson-in-Office, Austrian Foreign Minister Sebastian Kurz, delivered keynote addresses to open the 26th Annual Session, being held in the Belarusian capital under the theme “Enhancing mutual trust and co-operation for peace and prosperity in the OSCE region.”

President Lukashenko stressed that the Parliamentary Assembly is “an effective forum for strengthening security in our region,” critical for the OSCE. He spoke about conflicts in the Middle East that are having an impact on Europe, as well as protracted conflicts in the OSCE area such as Nagorno-Karabakh and Transdniestria, stressing that it is imperative that the international community focuses closely on these issues before they lead to even greater problems.

President Lukashenko highlighted in particular terrorism, climate change, migration, and the crisis in and around Ukraine as matters requiring urgent attention, noting the potential for greater co-operation in the politico-military sphere, including on counter-terrorism and cybersecurity. He further called for an OSCE summit of heads of state to take place in the near future and stressed the need to reinvigorate the OSCE’s founding principles agreed to in Helsinki in 1975.

President Muttonen noted that based on their shared historical experiences, OSCE countries have adopted common values and commitments to promote a comprehensive model of security that places democracy and human rights at the forefront. 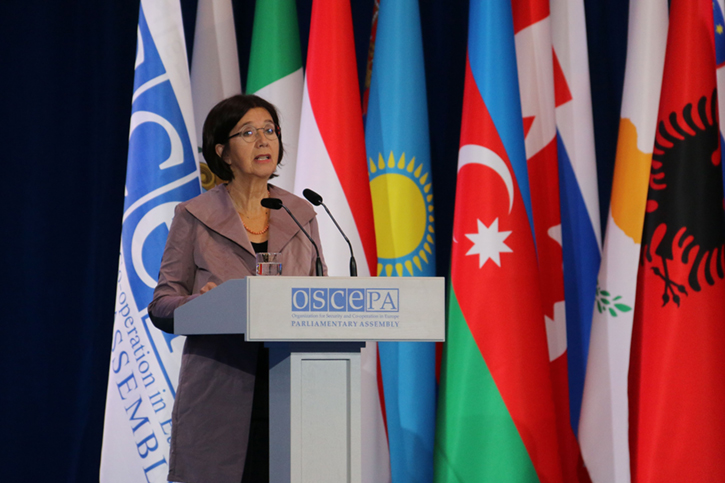 President Christine Muttonen (Austria) addressing opening inaugural session, Minsk, 5 July 2017“We have learned that real security means more than just the absence of war. Real security means ensuring that human rights are respected, that elections are democratic, that corruption is contained and that the rule of law is upheld,” she said. “It is through the hard work of democracy and diplomacy that we can help ensure political stability, economic growth, environmental sustainability, and ultimately, achieve our common goals of peace and prosperity.”

Muttonen noted that as a recognized forum for international diplomacy and conflict resolution – including mediation processes related to Ukraine and Nagorno-Karabakh – Minsk will serve as an excellent venue for the Assembly’s work in the days ahead.

Chairman Andreichenko stressed the role of parliamentary diplomacy in meeting common challenges facing all countries of the OSCE.

“We expect a constructive exchange of opinions during this session and, which is the most important, rejection of confrontational thinking in the process of finding solutions to the most difficult problems of the international agenda,” the Chairman said. “Parliamentary diplomacy must be used to build bridges and not to create division lines. Making a step towards each other in terms of main issues we will achieve progress in resolution of minor ones as well.” 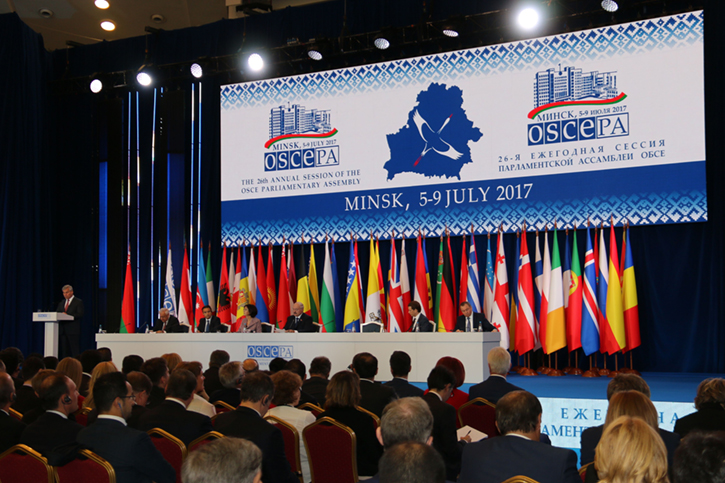 “Especially in these difficult times, members of parliament have an even more important role to play. I am counting on the parliamentarians and their networks among their domestic population to exert their influence, so that concrete progress can be made, not least in the crisis in and around Ukraine,” said Minister Kurz.

Earlier in the day, the OSCE PA’s heads of delegation met and unanimously agreed to establish an ad hoc committee on countering terrorism, which will be tasked with developing an effective international response to extremist violence. The committee was proposed by President Muttonen, who noted that a greater focus on this issue from parliamentarians utilizing the OSCE’s model of comprehensive security could have a positive effect in addressing the terrorist threat.

On Tuesday, the OSCE PA’s Ad Hoc Committee on Migration met to discuss recent activities and ongoing work, including a number of migration-related resolutions under consideration during the Annual Session.
Some 260 parliamentarians from North America, Europe and Asia – including several OSCE Partners for Co-operation – are participating in the Session. Resolutions to be debated cover issues including counter-terrorism, climate change, migration, and strengthening the OSCE’s human rights enforcement mechanisms.

After the amendment process and their adoption by the general committees, resolutions will be voted on by the full Assembly on the final day of the Annual Session on 9 July for inclusion in the OSCE PA’s Minsk Declaration, which will be presented to foreign ministers and speakers of parliament of the OSCE’s 57 countries.

For schedules, resolutions, live streaming during the event, news updates, press releases and other information, please visit www.oscepa.org. Photos are available for public use on the PA’s Flickr page at www.flickr.com/oscepa  and both the PA and the Belarusian Parliament are tweeting using the hashtags #OSCEPAMinsk2017, #ПАОБСЕМинск2017, #ПААБСЕМінск2017.