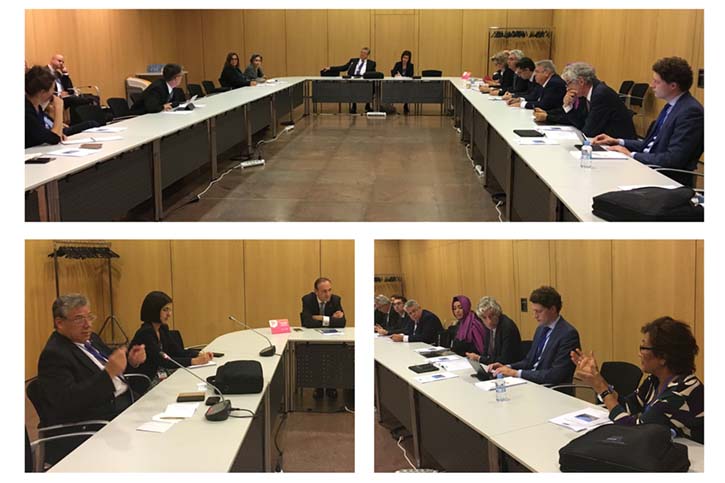 In a 60-page report distributed to the speakers of parliaments and foreign ministers of OSCE participating States, the Ad Hoc Committee stressed that the international community cannot stand by while migrants and refugees continue to perish making the dangerous journey across the Mediterranean Sea. OSCE countries can also not allow a handful of governments to deal with the problems alone, the report says.

Instead, solidarity and responsibility-sharing should be encouraged, and the positive benefits of migration underlined, while increasing efforts to curb migration by tackling its root causes. Further, the report observes that purely voluntary mechanisms for relocating refugees and asylum-seekers have proved insufficient and that the OSCE should adopt a politically binding decision for governments to share responsibilities.

The report highlights a number of best practices from around the OSCE area, including Canada’s Private Sponsorship of Refugees (PSR) Programme, Turkey’s and Greece’s cash card programme – in which refugees and migrants are provided pre-paid cards for food, housing, schooling or medical expenses – and Italy’s Protection System for Asylum Seekers and Refugees (SPRAR), which provides for a new model of decentralized reception facilities.

“The main goal of our Committee is to ensure that this crucial issue remains high on the agenda, even when the spotlight of the media and political players shifts to other issues,” said Ad Hoc Committee on Migration Chair Filippo Lombardi in his introductory foreword to the report. “As members of this Committee, we are ready to do our share. We also appeal to all concerned parliaments, governments and international bodies – but first of all to the OSCE and its participating States – to take concrete and proactive actions with a long-term perspective, in order to move beyond the present emergency response mode which is no longer tolerable.”

Lombardi, a Member of the Swiss Parliament, noted that a long-term migration-management strategy must include addressing the root causes of migration and creating the appropriate conditions – in terms of peace, security, the environment, economic development, democracy and human rights – for preventing sudden and uncontrolled migration flows. Further attention should also be paid to fighting against all forms of related trafficking, and combating political and economic exploitation of this tragedy, he said.

The Ad Hoc Committee’s report is the result of more than a year of extensive field visits, meetings with key international actors, and deliberations by 23 committee members from 19 OSCE countries. The committee adopted the report last week during the OSCE PA’s Autumn Meeting in Andorra. Ad Hoc Committee Chair Lombardi presented the report to the Assembly’s Standing Committee of Heads of Delegations on 4 October and it was distributed to foreign ministers and speakers of parliament today.

More information about the OSCE Parliamentary Assembly’s migration-related work can be found here.