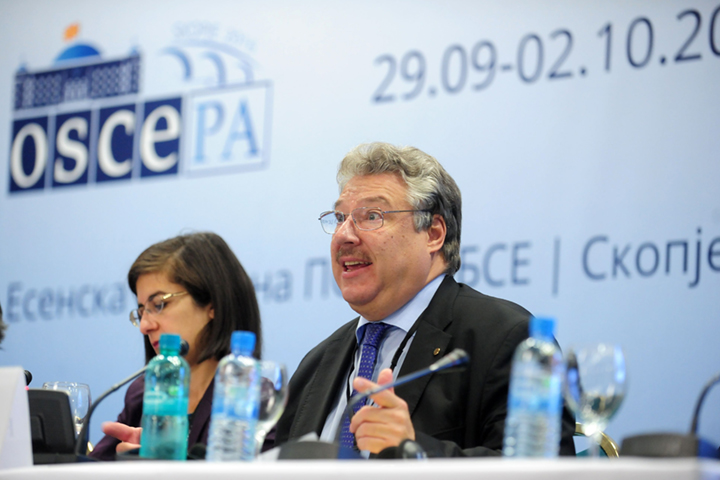 Filippo Lombardi addressing the OSCE PA's Autumn Meeting in Skopje on 2 October 2016COPENHAGEN, 10 February 2017 – The Chair of the OSCE Parliamentary Assembly’s Ad Hoc Committee on Migration, Swiss parliamentarian Filippo Lombardi, today called on the United Kingdom to stand by its commitments and continue to accept unaccompanied minors under the so-called ‘Dubs Amendment.’

Lombardi expressed dismay at the announcement Wednesday by the British government that it would close the scheme once a total of 350 children had been transferred from France to the United Kingdom under this provision, and noted that there had been no written agreement regarding the total number of minors to be covered by this scheme.

Furthermore, Lombardi rejected the idea that this scheme was acting as a magnet and encouraging more children to risk the dangerous journey across Europe, noting that only minors who had arrived in Europe prior to 20 March 2016 could qualify. Rather, he warned that the suspension of the scheme could encourage these most vulnerable persons to put their fate into the hands of human traffickers as they saw no legal alternative.

“As Lord Alf Dubs has pointed out, his amendment is targeted to help the people most at risk of falling prey to traffickers and criminal networks. The UK, and indeed all OSCE countries, have a responsibility to step up and ensure that these minors receive some basic support and protection,” Lombardi said.

The Dubs Amendment to the immigration bill passed in 2016 provides for safe refuge in the United Kingdom to unaccompanied minors if it is in their best interests. Its intention is to bring to safety unaccompanied minors who do not have a clear and close family link in the UK and are therefore not ‘straightforward’ Dublin III cases. It was widely expected that up to 3,000 unaccompanied refugee children could benefit from this scheme.

Lord Dubs, who initiated this amendment and is also a member of the OSCE PA’s Ad Hoc Committee on Migration, has previously criticized the criteria adopted by the British government which de facto limited the application of the Dubs Amendment to minors 15 years of age or under and of Sudanese or Syrian nationality, unless they are at high risk of sexual exploitation or under the age of 12. He recently travelled to Greece with the aim of facilitating the transfer of children to the United Kingdom under this amendment.

Additional information on the OSCE PA’s work on migration, including an interview with Ad Hoc Committee Chair Filippo Lombardi, can be found here.