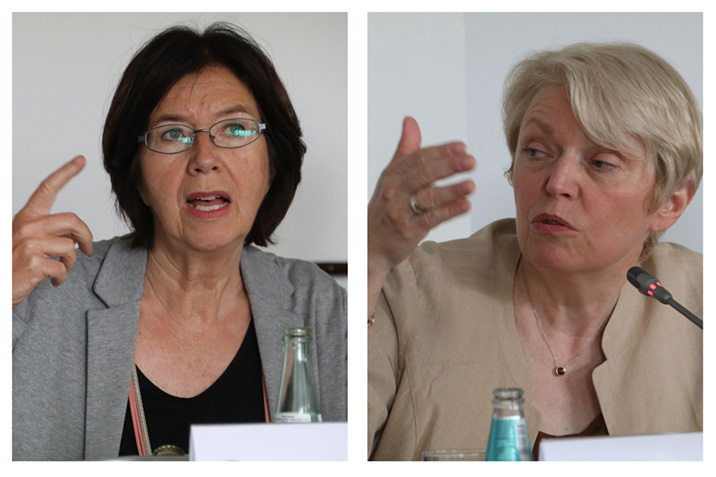 Christine Muttonen and Doris Barnett speak at the Leinsweiler seminar, 6 May 2017.LEINSWEILER, 8 May 2017 – An OSCE Parliamentary Assembly seminar held this weekend in Leinsweiler, Germany, focused on the question of how the renewed competition for geopolitical spheres of influence is impacting security in the OSCE area. Hosted by the German Delegation to the OSCE PA, the seminar addressed specific themes related to collective security, economic co-operation and the effects of geopolitical competition on the societies of countries involved.

OSCE PA President Christine Muttonen opened the seminar on Saturday noting that new tensions have arisen in the OSCE’s recent past that threaten to erode safeguards in place to prevent major conflicts.

“Over the course of nearly two centuries European history culminated in two devastating world wars, destroying the continent and causing tremendous suffering with millions of deaths,” she said. “It seems, unfortunately, that the lessons that this history should have taught us are being forgotten by more and more people, including the highest-level of decision-makers.”

Muttonen regretted that in recent years, there has been a tendency across the OSCE area to move away from co-operative decision-making and that powers are interfering outside their borders in attempts to establish spheres of influence. “This trend also undermines efforts to peacefully resolve conflicts,” she pointed out.

In her opening remarks, OSCE PA Treasurer and Head of the German Delegation Doris Barnett stressed the danger to peace and security posed by the “renationalization of politics” taking place across the OSCE area, and noted the importance of inter-parliamentary dialogue in promoting solutions to ongoing problems.

“Parliamentary democracy is not just a pastime, but a hard piece of work on the path to a more peaceful world,” Barnett said. “With this, we also support our governments in their ongoing efforts.”

Bringing together 22 Members of Parliament from 13 countries, the Leinsweiler seminar also included the participation of German parliamentarians representing Southern Palatinate and Rhineland-Palatinate, and representatives from the OSCE’s governmental side and executive structures, as well as other European institutions.

The seminar, entitled “Renationalization of politics and the fight for geopolitical spheres of influences: Endangering Peace and Security,” was the third of a series of OSCE PA seminars held in the French-German border region of Leinsweiler, following events in March 2015 and April 2016 dedicated to considering parliamentary contributions to OSCE efforts in addressing conflicts.