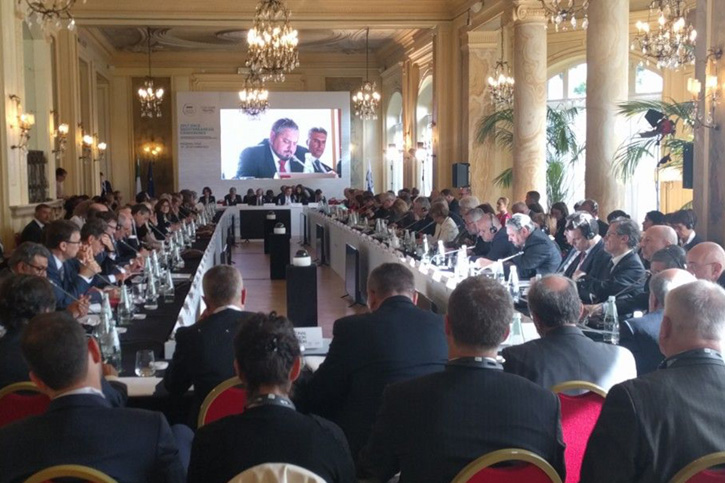 2017 OSCE Mediterranean Conference in Palermo, 24 Oct. 2017.ROME, 25 October 2017 – Senior members of the OSCE Parliamentary Assembly are in Italy this week exploring challenges, exchanging experiences and assessing strategies related to developing a comprehensive response to large movements of migrants and refugees in the Mediterranean.

Speaking at the high-level political segment of the Mediterranean Conference, Vice-President Tidei highlighted the work of the OSCE Parliamentary Assembly on migration, which she noted is one of the most urgent and important challenges on the international agenda today.

“The stability of the OSCE area depends on developing a co-operative response to migration,” she said, stressing the need for recognizing migration’s humanitarian aspects. “Every now and then our consciences must confront the tragedies of the sea. These tragedies have a human dimension that we cannot be indifferent to; we must be concerned about every single child, woman, adult, and elder.”

Tidei commended the work of Italy in dealing with the humanitarian crisis and promoting the stabilization of Libya, in particular, as well as reaching agreements with countries of origin and transit.

Also addressing the Mediterranean Conference on Tuesday, Lombardi presented the PA’s recently issued report, “Ensuring a Coherent, Shared and Responsible Governance of Migration and Refugee Flows,” and urged participants to look beyond the immediate migration-related challenges facing the Mediterranean region and towards the economic and social opportunities presented by migration in the longer term.

“It is vital that we first address the root causes of migration,” he said, “starting from poverty, natural catastrophes and climate change, but also highlighting the destabilization of many African and Middle Eastern countries initiated both by regional powers and by powerful international strategic players.”

Lombardi urged policymakers to honestly assess the political mistakes that have been made resulting in widespread destabilization and to take measures to alleviate the situations in refugees’ and migrants’ countries of origin.

“Our political duty is to move from the emergency short-term response towards long-term and sustainable migration policies which enable migrants and refugees – keeping in mind their different status – as well as their host countries to engage in a mutually beneficial relationship, thus contributing to development, peace and stability of the whole OSCE region,” Lombardi said.

Special Representative Allizard spoke at the session on countering smuggling and trafficking in human beings amid massive migration flows. He noted that the challenge is on one hand to protect vulnerable migrants from exploitation along migration routes and in countries of destination, and on the other to more effectively fight transnational criminal networks profiting from the illegal trade and exploitation of vulnerable people on the move.

“States should be encouraged to use best practices to promote the principle of non-discrimination, to ensure co-ordination and co-operation among parliaments, governments and other stakeholders in supporting and protecting female migrant workers,” he said. “Unregulated labor migration and criminal networks involved in smuggling and trafficking in human beings must be eliminated.”

On Thursday and Friday, Lombardi is leading a delegation of OSCE parliamentarians to Rome and Bolzano to assess developments in the international response to the surge in irregular crossings on the Central Mediterranean migrant route. Lombardi, Tidei and several other members of the OSCE PA’s Ad Hoc Committee on Migration will focus on whether European and Italian strategies have been effective in addressing the crisis.

The programme in Rome includes visits to the Ministry of Interior, the UN High Commissioner on Refugees, and a reception centre managed by the Italian Red Cross. In Bolzano the delegation will visit migrant reception centres and meet with the Bolzano Prefect and Chief of Police.