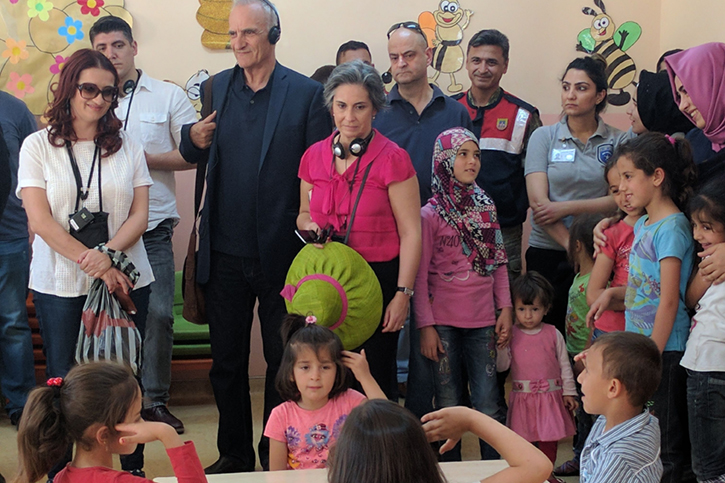 Isabel Santos (centre) and members of OSCE PA Ad Hoc Committee on Migration at Nizip refugee camp in southeast Turkey, 17 May 2017ISTANBUL, 18 May 2017 – Members of the OSCE Parliamentary Assembly’s Ad Hoc Committee on Migration today concluded a three-day visit to Turkey, commending the country for its efforts in hosting more than three million refugees – making Turkey the host country with the largest refugee population in the world – and especially in granting access to education, health care and employment.

Committee members noted that the disproportionate amount of refugees being hosted by Turkey recalls the need for greater responsibility-sharing by European countries and all participating States of the OSCE, as well as the urgent need to redouble diplomatic efforts to end the Syrian conflict and address other root causes of migration. At the same time, noting that 90 per cent of Syrian refugees live outside the camps, they called on the international community to support Turkey in its efforts to meet the needs of these populations and to strengthen efforts in providing equal protection to over 300,000 non-Syrian refugees and asylum seekers.

“The sheer scale of the numbers of refugees that Turkey has welcomed is a reminder of how much more we must do to help those fleeing violence, persecution and war,” said OSCE PA Vice-President Isabel Santos (MP, Portugal), who has led the PA delegation this week to Turkey.

“While other countries impose tight restrictions on accepting migrants and refugees, Turkey has gone above and beyond in providing shelter and basic services such as education and health care,” Santos said. “Now is the time for the international community to move from words to action, to devote to this emergency the full attention that it warrants and to work towards a durable solution to the Syrian conflict.”

She added that the impressive numbers of Syrian refugees should not overshadow the plight of the Iraqis, Afghans and others fleeing violence and persecution and who have sought refuge in Turkey. “Turkish authorities should lift the geographical restriction to the application of the 1951 Refugee Convention and grant equal protection to all persons entitled to international refugee status, regardless of whether they are Europeans or non-Europeans, Syrians or not,” Santos said.

The seven-member PA delegation this week met with a range of officials from the Turkish government, international community and civil society, and visited the Nizip and Kahramanmaras refugee camps near the Syrian border. Ad Hoc Committee members saw first-hand the conditions of primarily Syrian refugees living in both tents and containers. It was noted however that the vast majority of Syrian refugees live outside of the camps so the delegation was not be able to observe their conditions. 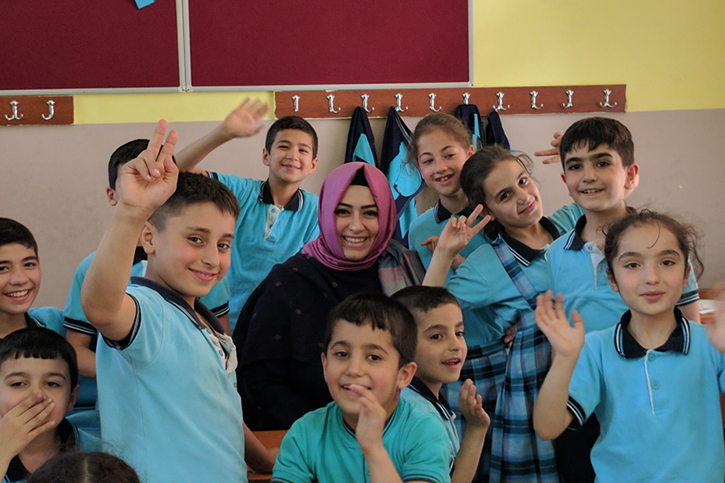 Sena Nur Celik at a school for vulnerable Syrian refugees in Gaziantep, 17 May 2017“For years, Turkey has been on the frontline of the refugee crisis, pursuing an open border policy towards Syrians without discrimination by strictly complying with the non-refoulement principle and exerting enormous efforts to provide millions of refugees with accommodation, health care, education, employment, vocational training and psycho-social services. While Turkey has channeled funds amounting to $26 billion into these efforts, the total contribution received from the international community remains below one billion,” said Vice-Chair of the Ad Hoc Committee on Migration Sena Nur Celik (MP, Turkey).

She added that as the crisis has global repercussions, frontline countries should not be left alone in bringing solutions. “A global response based on shared responsibility is vital for sustainable migration management. The OSCE countries should increase their relocation and resettlement targets. The international community should mobilize more resources to support frontline countries and increase efforts to address the push factors in origin countries. We should unite our efforts to shoulder this huge responsibility especially in the field of education in order to prevent a lost generation,” she said.

Holding meetings with representatives from the Ministry of Foreign Affairs, Ministry of Interior, Ministry of Labour and Social Security, Ministry of Family and Social Policies, Ministry of Health, Ministry of National Education, Ministry for EU Affairs, and the Command of the Coast Guard, OSCE PA members were briefed on Turkey’s comprehensive efforts to deal humanely and effectively with the influx of refugees from neighboring Syria and other war-torn countries such as Iraq and Afghanistan.

Meetings were also held with the provincial and municipal authorities of Gaziantep as well as representatives of international organizations including the World Food Programme, the UN Refugee Agency, UNICEF, and the International Organization for Migration and local NGOs.

“We have heard from a range of officials on the unparalleled national and international efforts to accommodate the world’s biggest refugee population and have seen the largely satisfactory living conditions for refugees in two container camps in southeast Turkey,” said Ad Hoc Committee member Georgios Varemenos (MP, Greece). “Difficulties in the tent camps are to be expected given the huge size of the populations concerned,” he said. Varemenos stressed that the adequate solution is the EU-Turkey agreement, which he urged both sides to implement. 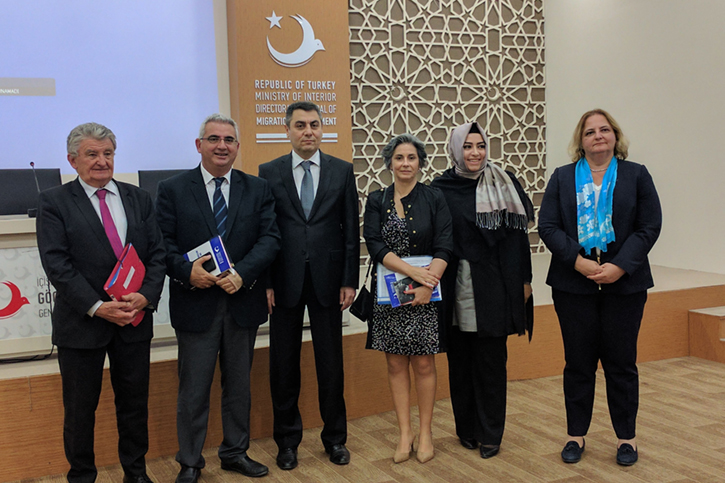 Members with Attila Toros, General Director of the Department of Migration, Ankara, 16 May 2017The delegation to Turkey this week included OSCE parliamentarians from France, Cyprus, Italy, Turkey, Portugal, and Greece. It was hosted by the Turkish Delegation to the OSCE PA, headed by Vedat Bilgin, and was the fourth field mission conducted by members of the Ad Hoc Committee. Earlier this month, committee members visited Athens and the Greek island of Lesvos, and last year visited Calais, Grande Synthe, and Sicily.

In its field visits, committee members pay particular attention to the situation of vulnerable refugees, especially women and children, as well as unaccompanied minors. Committee members travelled to Brussels and Geneva in January 2017 to meet with key officials from the EU and main international organizations actively involved in managing the migration crisis.

The Chair of the Ad Hoc Committee on Migration, Swiss parliamentarian Filippo Lombardi, intends to present a report and resolution on the topic at the OSCE PA’s 26th Annual Session in Minsk, Belarus, in July.

For more information on the work of the OSCE PA’s Ad Hoc Committee on Migration, please click here.

Photos from this week’s visit to Turkey are available on Flickr.