Curbs on freedoms and concerns over procedural integrity tarnish elections in Belarus even as candidate numbers rise, observers say

MINSK, 18 November 2019 – Fundamental freedoms were disregarded and the integrity of the election process was not adequately safeguarded in the early parliamentary elections in Belarus even as the number of registered candidates increased, international observers concluded in a preliminary statement published today. 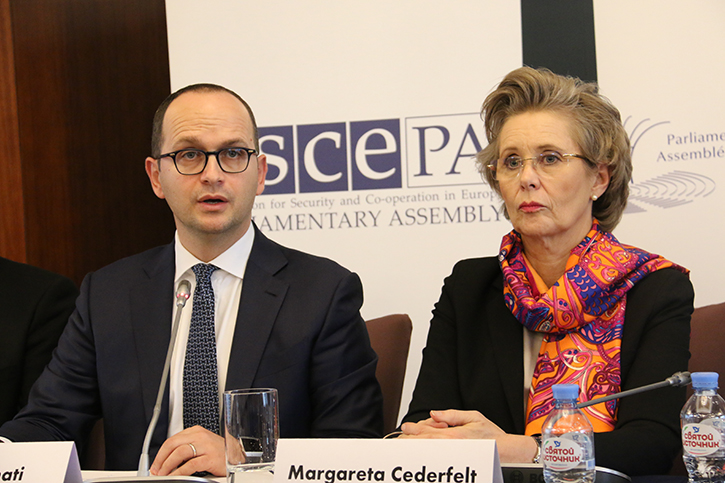 Ditmir Bushati and Margareta Cederfelt at a press conference in Minsk following the election, 18 November 2019The observation mission is a joint undertaking of the OSCE Office for Democratic Institutions and Human Rights (ODIHR), the OSCE Parliamentary Assembly (OSCE PA), and the Parliamentary Assembly of the Council of Europe (PACE).

Both early voting and election day were calm. While the opening and voting procedures at polling stations were mostly followed, significant shortcomings during vote counting gave rise to concerns about whether the results were counted and reported honestly.

The enjoyment of fundamental freedoms was hindered by obstacles to political party registration, fees and limited space for holding public gatherings, and criminal sanctions for defamation. At the same time, there was a lack of safeguards in the administration both of election day and early voting procedures, which negatively affected the integrity of the process amidst repeated expressions of distrust in the work and impartiality of the election administration at all levels.

“These elections have demonstrated an overall lack of respect for democratic commitments,” said Margareta Cederfelt, Special Co-ordinator and leader of the OSCE short-term observer mission. “In a country in which the power and independence of parliament is limited and fundamental freedoms are restricted for both voters and candidates, parliamentary elections are in danger of becoming a formality.”

The Central Election Commission (CEC) carried out an extensive information campaign, and took steps to make voting accessible for people with disabilities. At the same time, the domination of election commissions by the state limited their impartiality and independence, potentially undermining public confidence in the election process. Some 6.8 million voters were registered to cast their ballot, according to the CEC, but voter lists are not public, contributing to the overall lack of transparency.

The legal framework within which the vote took place provided insufficient guarantees for the conduct of elections in line with international standards. Shortcomings regarding the unbalanced composition of election commissions, restrictions on voter and candidate rights, and safeguards for voting and counting therefore remain unaddressed.

“The choice of political and electoral systems is the sovereign decision of Belarus. However, Belarus is a member of our European family, and we expect all members of our family to adhere to electoral international standards. We are disappointed that Belarus has not implemented the recommendations we made in 2016, thus depriving their citizens, both voters and candidates, of full involvement in the democratic process,” said Lord Blencathra, Head of the PACE delegation. “The Council of Europe believes that electoral law changes are essential for long-term stability in Belarus. Belarus participates in the Council of Europe Venice Commission, which sets the recommendations for election laws. We stand ready to work in partnership with them to effect lasting democratic change.”

Ditmir Bushati and Margareta Cederfelt observing at a polling station in Minsk, 17 Nov. 2019The election campaign itself was low key, and characterized by a lack of engagement by both candidates and the public. No large rallies were held, and numerous candidates refrained from any campaign activities. While candidates were able to carry out limited campaign activities, the election administration’s use of discretionary powers to deregister opposition candidates on minor grounds compromised the integrity and inclusiveness of the registration process.

“Elections without freedom for debate and genuine participation, as we saw here in Belarus, are not the opportunity for the public that elections should be,” said Ditmir Bushati, Head of the OSCE PA delegation. “Political actors were simply not working on a level playing field here, resulting in what were effectively non-competitive elections.”

Overall, the legal framework does not adequately guarantee the conduct of elections in line with OSCE commitments and other international standards and obligations, underlying the need for a comprehensive and inclusive reform. Limited efforts to revise the electoral legislation following the previous elections were not realized.

The election campaign was lackluster and generally did not engage voters. Candidates could freely conduct most campaign activities and were entitled to organize events at most locations. However, District Election Commissions issued warnings to some candidates that effectively curtailed criticism of the government in campaign messaging, and which ultimately led to the deregistration of some candidates, in violation of OSCE commitments and the freedom of expression.

Aggregated campaign finance data was made public, but the law does not require the election administration or any other authorities to publish or audit candidates’ full financial reports, limiting the transparency of campaign finance and the effectiveness of oversight.